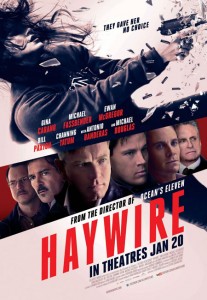 I went into the Haywire era knowing nothing about Gina Carano, I went away a fan. A fan that hopes she gets a chance to make a film that’s more Gina Carano than Haywire.

Gina is an amazing athlete, a very credible fighter and martial artist, she has power, speed, looks good in black and boasts amazing eyes. In Haywire she plays Mallory Kane, a super agent who finds herself on the wrong side of a frame up, so she spends the remainder of the film seeking justice against the laundry list of bona fide ‘name’ actors who may or may not have done her wrong, including names such as Fassbender, Michael Douglas, Ewan MacGregor, Antonio Banderas and Channing Tatum.

But for much of the film Mallory gets her spy on, wandering about, rocking dresses and observing rather than kicking heads. When she does unleash the results are – to be frank – spectacular, Carano has power moves that would be the envy of most male action heroes and athleticism that few can match. It’s just that the moments in between seem to think they’re cleverer or more important than they are, despite the main plot being derivative of a dozen Van Damme, Arnie and Stallone movies of the 90s.

Critics who normally find no value in mindless action films will regardless extol the virtues of having ‘real director’ Steven Soderbergh being the camera here and say things like ‘This is how action should be’ and ‘An action flick with brains, brawn and beauty’, but really instead of restraining Carano’s abilities by having her wander around checking her Blackberry 600 times (seriously how much did they pay?) I would rather see Carano get her Cynthia Rothrock moment in the sun.

Final Rating – 6.5 / 10. Gina Carano has the moves, let her move. If she heads down the straight to DVD B action route I’m first in line, this is a few good fight scenes constrained by too much dull over-thinkery.