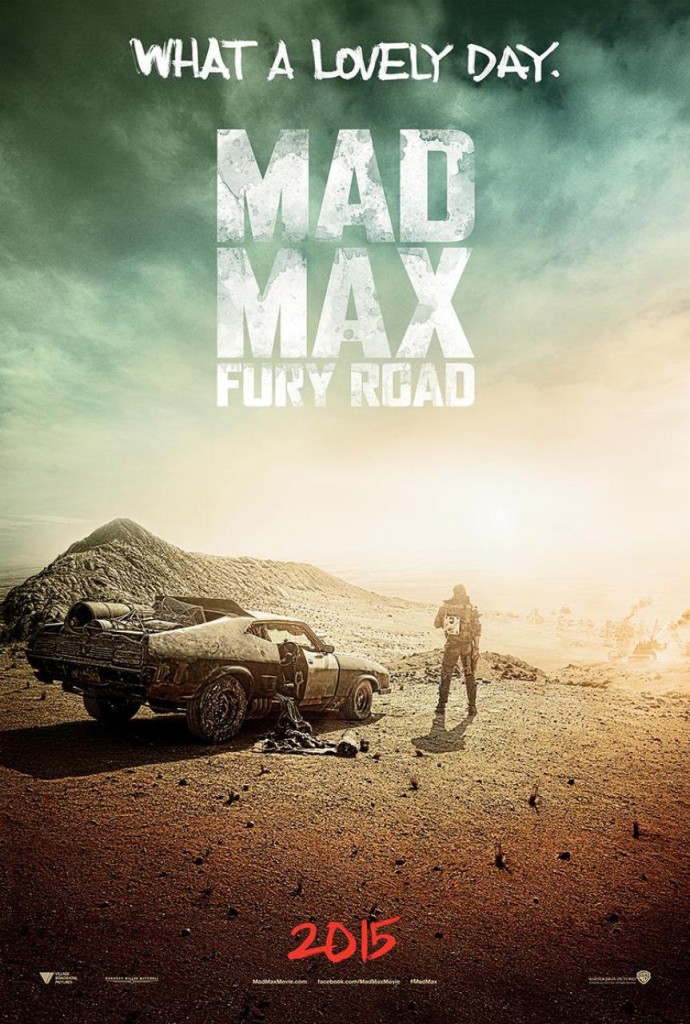 Nothing grows in this wasteland. Not for a long time. The earth has long since gone sour. The sun continues to bake it. Dust storms prevent it from settling. Poison and contamination seep ever lower into what was once arable land.

Yet life remains precious. Gasoline is precious. Water is precious. However none are treated as such. The wastage of all supposedly ‘precious’ things gives rise to thoughts of how just maybe mankind came to be in such a predicament. 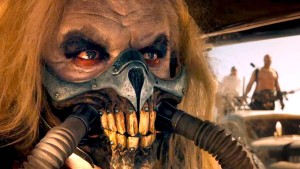 Immortan Joe is an outlier. He has all these things. All these precious things. And while he covets them high above the impoverished masses in his towering fortress, he is careful to provide the occasional taste to his subjects. Something to remind them of his wealth and to inspire the feverish devotion that fuels them.

Few things make sense in the wasteland, but while Joe provides just enough to keep people alive, he is beloved. Despite his great wealth Immortan Joe is riddled with disease – as is most of the population – but he is driven by a lust for purity. When this is compromised, it seems nothing will stop Immortan Joe from retrieving what he feels is his only. 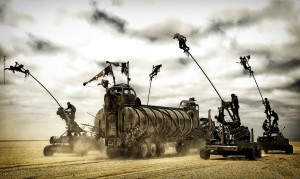 Look. I tried hard to make the above sound as interesting as I could. You need to see this film! But the fact is that most film’s plots can be gussied up and sold as something more than they are. Mad Max: Fury Road, needs no more marketing than this; you have not seen a film like Mad Max: Fury Road. And you should pray to the visual genius of George Miller that we all live to see more of this.

Lego was founded in 1932. Hot Wheels in 1968. George Miller is 70. He may have had Lego, he may not. On the evidence on display here, one can only imagine what sort of strange and disturbing games went on in young George’s sandpit. The neighbourhood kids might have run from the Miller yard screaming sixty years ago. Now, this is just what a tired genre needs.

Every car might start with the usual chassis, axles and an engine – or two – but in the Miller backyard they seldom ended there. How about a ute canopy on a truck… on a trailer? What about a sedan with tank tracks? Who needs a cassette player when you can have a monstrous moving set of speakers, with a horde of drummers at the rear, and a lunatic guitar player in a red onesie busting out ear splitting riffs for the entire journey? And why have trucks at all when you can have MONSTER trucks?

And that’s before the incredible sight that is Immortan Joe’s hand selected coterie of zealots, painted white, shaved bald and brainwashed into believing that Joe will provide them passage to the promised land, and named War Boys and Half-Lives because of the growths that riddle their body. Either the sickness of the battle will take them. Soon. 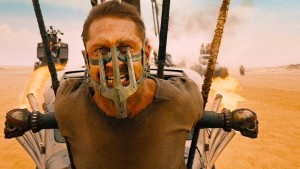 And what of Max (Tom Hardy)? Well he remains a loner, but across time a vast numerical advantage will generally win out over even the most skilled and driven. It is not this fact that convinces Max to team with one armed Imperator Furiosa (Charlize Theron) – one of Immortan Joe’s most respected soldiers. It is not for the quintet of hotties who seem the only ones immune to grease, dust and dirt. No. For reasons not to be spoiled here, Furiosa and Max lead a bizarre group of albinos, make-up ad models – and later – weathered survivors, through chaotic and incredible chases across some of the most vibrant desolation ever put on film, all while pursued by hands down the most gonzo posse that could ever possibly be imagined.

We have been a little blessed in the last few years to have been gifted some modern day genre classics; Looper for sci-fi. The Raid for martial arts. A (decreasingly) go,den age for the superhero. Nothing has given the visceral nitro fuelled rush of the last 30 minutes of Mad Max 2 for thirty plus years. Fury Road has taken that incendiary half hour and multiplied it in every way.

The acting is – a couple of underwear models aside – mostly good. Charlize Theron somewhat surprisingly has more dialogue and more heavy lifting than Tom Hardy as Max himself. But this is not an acting showcase, it is an action, stunts and car chase film. And the best I have seen in a long while.

Sometimes it’s only when you see something so mind-blowing that you realise just what you have gotten used to settling for.

After the film ended we joked that the script went something like “Opening credits. Chase scene. Closing Credits.” While that isn’t far wrong actually the scope of this film is incredible. Every frame of the many lengthy chase scenes is packed with Holy Fuck imagery, from the guys on vaulting poles to the vehicles flying across the screen, many to their metal shredding doom. Mad Max might not be one for words, but his fourth film is a feast for the eyes, and a two hour smorgasbord for the impressionable 18 year old in all of us.

Final Rating – 9 / 10. I feel like the skinny kid carrying an empty bowl. Please George, some more?