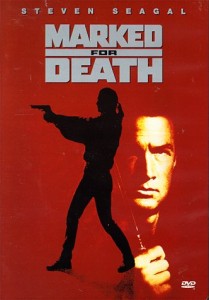 For a few years Steven Seagal burned brightly like a lanky and balding (yet-ponytailed) flame, self righteously carving out a niche in action films despite being an obvious po-faced douche.

Now he only exists thanks to his misguided self of self-worth and society’s unwillingness to discard once pleasant memories, regardless of how bloated and corpulent they have become.

It was during this five odd year spanning the late eighties and early 90s that Seagal made his best film. And his best films were so succinct that the title told ticketbuyers what to expect.

In Nico: Above the Law he played Nico, and he was…

Then came Hard to Kill, where his character was…

In Out for Justice Seagal played a man…

Under Siege saw Steven in a situation where he finds himself…

Then came On Deadly Ground where he found himself… well by this time almost no-one cared where he stood anymore.

In between those was Seagal’s cinematic high point in Marked for Death, where his character John Hatcher is…

Hatcher hits everyone. He hits the guys he likes. He hits his best friends a lot. He hits people he just met. So you can imagine how he treats people that he doesn’t have an affinity for, let alone those that MARK HIM FOR DEATH!

Oops. I should have mentioned ‘spoiler alert’.

Despite his proclivity for casual violence the film finds Hatcher Sworn Off Killing – a title that was considered momentarily but shelved – and spending his early retirement alongside friends and family in Chicago.

Now I’m not sure how close Chicago is in relation to Jamaica, but regardless Screwface (Basil Wallace) and his crew of rastifari-guys descends upon the city in a dreadlocked storm of cool pronunciation and drug dealing menace.

I and I found this film very quotable.

As was always inevitable Hatcher’s life of solitude and ridiculous outfits is disturbed unceremoniously when he interrupts some bad Jamaicans on the job in a crowded nightclub that he was dragged to by old Vietnam buddy Max (Keith David).

Now a victim of circumstance, Hatcher is forced to abandon his life of turning a blind eye in order to defend his turf. Sometimes defending your turf means putting in security systems and maybe buying a gun. And sometimes defending your turf means heading overseas to Jamaica to take out a heavily armed drug cartel utilising your patented ‘flail and divert’ fighting technique, with some limb snapping thrown in for good measure.

Marked for Death is hardly original and far from great, but it remains a guilty pleasure. The violence is frequent and silly – ‘Jackie Chan fluid’ Seagal is not – and the dialogue and plot over-sincere to the point that it should be self parody. The delight though is derived from knowing that Seagal meant this shit. This is art to him, an expression of his purity and openness to new cultures through physical violence and ridiculous dialogue peppered with awful jokes.

I enjoy some of the guilt free violence in Marked for Death. I enjoy listening the unique patois of the Jamaican drug dealers. I enjoy laughing at the clumsy macho back and forth between Seagal and the guys, and the mawkish sentimentality and sensitivity that he shares with all females.

Final Rating – 7.5 / 10. In summary while none of it appears obvious on the surface, there is much to enjoy with Marked for Death. I only wish that the title would give more of an indication as to what the film is about…