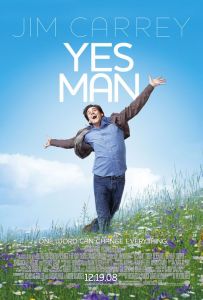 Carl (Jim Carrey) is what you thought of your Dad when you were in your teens; boring, cheap, conservative and never wanting to do anything. Then in a baffling change of heart he decides to perform a ‘lifestyle 180 degree turn’ and treat every opportunity like Nicolas Cage does bad scripts, by saying YES! To everything, regardless of how inane or dangerous it appears on the surface.

Now in reality if you say ‘Yes’ to everything you’ll end up with dozens of unnecessary and pointless purchases, fifty seven raffle tickets and memberships to multiple religions and associations that you don’t necessarily care about or even agree with. You might also own five cars that you can’t pay for and have agreed to renovations and improvements that your home doesn’t need.

In movie-land though every time Carl says Yes it leads to good things, and the rare occasions that end in a No result in bad stuff. Yes makes him popular, unpredictable and fun. It also introduces him to spunky and willing Allison (Zooey Deschanel), a long term Yesser who embraces life and its many challenges. Of course in real life you’d perhaps steer clear of the self-professed beat poet whose passion was taking photos while jogging, but when she looks like Zooey Deschanel she is a quirky breath of fresh air, not a crazy woman destined to live in a smelly apartment full of cats.

Yes Man is a lesser version of Liar, Liar. A film where the premise exists to place Jim Carrey in unlikely situations in which he can over-react and yammer incessantly. This works in some films; most notably the Ace Ventura films and Bruce Almighty, but it’s a finite resource that is nearing the end.

Yes Man is more akin to Eddie Murphy’s recent A Thousand Words, with a similarly unlikely premise that demands strange behaviour from the central character, leadings to vast lifestyle changes and valuable lessons learned. Both films are unremarkable but impossible to hate. They exist in that ethereal sub-genre of ‘light comedy with obvious message’. Don’t lie. Listen more. Be more outgoing. Like so many of Grandma’s ‘uplifting’ embroidered wall hangings. Well meaning but in the end; just more words.

Except with Yes Man and A Thousand Words, these are ‘just more films’.