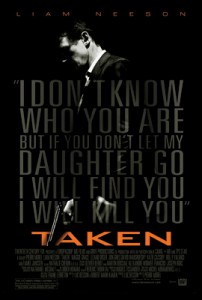 Check this out as a recipe for an awesome action flick.

Liam Neeson is Brian, a recently retired man who once performed top secret tasks for someone or other, it’s all very hush-hush “I could tell you but I’d have to…” stuff.

He had retired to be near – and to get to know – his daughter Kim from a former marriage to Lenore (Famke Janssen) who has since remarried to Mr Moneybags.

When 17 year old Kim goes to Paris for a holiday Brian is reluctant to let her go unescorted but is “convinced” to allow it rather than risk another setback in his rebuilding of his daughter’s trust.

25 minutes into the film his daughter is Taken.

Why Kim is taken (she’s hot jailbait), why she was in Paris (a U2 tour) and what might happen to her (sold into prostitution) are largely irrelevant in the big picture, what is important is how Brian might react and how he might choose to solve the dilemma…

27 minutes into the film Brian gives the following speech to an unseen and unknown man on the other end of his daughter’s phone:

But what I do have are a very particular set of skills; skills I have acquired over a very long career. Skills that make me a nightmare for people like you.

Well that clears that up.

From that point on all logic and reality goes out the window. That’s a good thing by the way – this is a vengeance film not a science project. It is not his only speech in the film but it is the best, setting up a hectic non-stop last hour that sees a body count that tops 30. Easily.

Off to Paris we go. Shortly after “the speech” Brian meets a French policeman that he once worked alongside and is told “Try not to make a mess!”, well if he tried he certainly didn’t try very hard.

What follows includes – but is not limited to – the following;

Taken has the aforementioned high body count, some running gun battles, multiple car chases and some pretty nifty and brutal hand to hand combat. This is no action-comedy either, Liam and co play it all straight-arrow from start to finish – ain’t a damn thing funny here!

Fortunately being a movie set in France where the hero hunts a bunch of Albanians everyone manages to speak English 95% of the time. Taken is by no means a masterpiece, but you’ll watch a lot of similar films before you see a 90 minute vengeance film that keeps the pulse pounding and the eyes wide open as good as this one.

By the way – Here is a film where EVERYONE is wrong but Brian. The ex-wife, the daughter, the bad guys and the cops all make claims that prove to be FOS, Taken is the ultimate “I told you so” film.

Final Rating – 8 / 10. After making him go to Paris and kill a few dozen strangers I sincerely hope Brian at least grounded Kim for a week! At least he saved her from attending a single U2 concert.