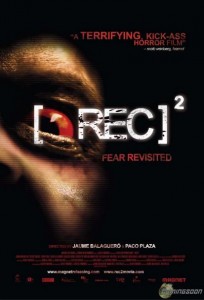 Nice poster. Off to a good start.

I saw the original Rec: a couple years ago and found it merely adequate, a far cry from the fawning it seemed to receive from critics and punters alike. I just didn’t – and still don’t – get how very original it was all supposed to be, I mean aside from the ‘we’re filming this’ angle there wasn’t much different from a dozen other virus/zombie/infected films out there. It was OK though, no obvious minuses and no significant pluses, so I left it at that. A reasonable way to blow 80 minutes.

Now I stress this next bit occurred after I watched the sequel. I jumped on imdb message boards to clarify one thing (which I won’t mention here due to its potential spoiler-ability) and was surprised to see much spirited debate as to the merits of the two films when compared to each other. Many punters were strongly arguing for the first and decrying the second, an equal number seemed to claiming the opposite, and a minority – say 10% – were holding firm that they were both equally good or dire.

As one of the ‘Rec: 2 craps all over the original’ voters this surprised me. But again in reflection it must go back to my first point; I didn’t find the original film’s premise that creative or original. Many obviously did.

Now in saying that I did think Rec: 2 was far more ambitious, and even though I wholeheartedly agree that some of the new plot developments simply don’t make much sense I felt that the best scenes in the sequel are streets ahead of the first film’s. On top of that I was far more entertained throughout even when I couldn’t make head nor tail of what was going on, to me enjoying the thing more than counteracts vague feelings that some plot points are a little forced. It is after all a balls to the wall vicious little horror movie about the undead.

Rec: 2 starts immediately after Rec:, and I mean immediately. The first scene dovetails to show the unfortunate heroine of the first film, TV reporter Angela, and her final scene before the closing credits (which I won’t spoil here). This film then moves to the S.W.A.T. (equivalent) team en route to the apartment complex for clean up duty.

The four man team lead by ‘Chief’ and including Martos, Rossa and Larra are briefed outside and introduced to their liaison before entering, a man named Dr Owen. Each man is equipped with an ‘Aliens’ style helmet cam to document their visit and actions, they can also ‘cut in’ the cam of another soldier if necessary, which brings a new element of pic in pic so that all can experience the unfortunate encounters that follow. The building is now totally sealed off and inaccessible to civilians, once they gain access Dr Owen calmly tells them that he has voice recognition equipment, and without his say-so no-one is getting in… or out.

As the crew move through the residue of the events of the first film, passing puddles of blood and evidence of ‘unrest’ Dr Owen gives them the lowdown on what they are facing. The ‘virus’ is not airborne and is passed through fluids and physical contact, blood, saliva and such. The crew immediately take off their gas-masks, which seemed nuts to me seeing as you would assume the mouth and eyes would be the orifices I would most want obstructed.

Moving on, the lights in much of the building are out, meaning they move in torchlight. And not good torchlight. In fact before I go further might I suggest that for future raids or searches the Spanish equivalent of S.W.A.T. consider investing in torches which light up a larger area than a pin-point. I realise this might not make for better horror movies but I’d be a hell of a lot happier being able to see more than four inches in front of my face, especially if the locals were keen to express just how happy they were to see me by tearing at my flesh maniacally.

Now comes the first encounter (which was quite cool and introduced a genuinely creep and new aggressor – though strangely one not seen again after the scene ends). Which is followed by an explanation from Dr Owen that I will not divulge for the film’s sake – suffice to say I was not sold – but it also must be acknowledged that they ended up doing a very fine job utilising the flawed device. So I guess it all averages out.

The initial encounter is quite effective even though it was obviously coming, and some of the imagery is extremely effective. Once this encounter is over the action runs a hundred miles a minute, hardly 2 minutes go by without an attack or discovery that furthers the story. Wave after wave of zombies of all description and size approach from all direction – though it must be said that the standard attack approach of ‘camera-guy turns and a frenzied zombie runs directly at him screaming’ is used many, many times. Perhaps too many, which is why some of the other scares stand out more.

Eventually the unit comes across some non-zombies, intruders to the building that shouldn’t be there. Kids who also fortunately had the foresight to bring a camera to document their antics, this is where things momentarily get confusing.

Once the intruders are introduced the action rewinds back to the point where the S.W.A.T. team show up for briefing, only this time it follows the three kid’s point of view, all the way up to the same point where they and S.W.A.T cross paths.

Together the surviving intruders and soldiers continue on looking for an antidote that can only be sourced in the blood of the ‘original carrier’.

There is a new development near the end that was refreshing and unexpected, a few new tricks and ideas that were not from the first film, and even as I alluded before although the central premise behind the ‘virus’ is altogether new and not all that believable they at least followed through with it all the way, which justified some fun scenes and a pretty cool ending sequence.

All in all while I still don’t think the original film was that crash hot, and the sequel has some deeply embedded flaws, consider me sold on the entertainment value. This is a bold and audacious effort that should be a lot of fun for horror fans.

Final Rating – 8 / 10. Foreign horror films improve each year and blaze new trails in the genre, but it’s hard to read subtitles and watch the corners of the screen at the same time!