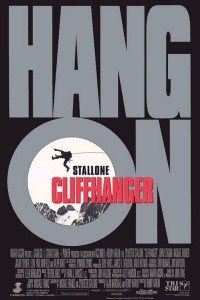 Cliffhanger is occasionally sloppy and always silly. It’s the kind of film that couldn’t be made without a larger than life star like Sylvester Stallone, and to Sly’s credit he gives it his shirtless all, even as credibility crumbles in an avalanche of flawed logic and inane decisions.

Sly plays Gabe, an expert rock-jock who until recently worked mountain rescue finding and extracting the out of their depth and over eager climbers from peril.

But thanks to a botched save that blotted his copybook and dissolved a friendship with colleague Hal (Michael Rooker), Gabe’s love affair with extreme pastimes is over, and seemingly so is his relationship with girlfriend Jessie (Janine Turner).

In fact, Gabe was packing to leave the mountain once and for all before Qualen (John Lithgow) and co dropped out of mid air to complicate matters with his money and faux European accent.

When an audacious mid air heist leaves millions of dollars in newly minted US currency sewn across the mountaintops, evil criminal genius Qualen and his group of big dumb 90s action cheeseheads descend upon the mountain to sniff out their ill gotten but temporarily lost gains. However with no aptitude in the scaling and mountaineering arts, it isn’t long before Hal and Gabe are forcefully co-opted to act as guides until the cases of money – each traceable thanks to tracking devices – are found and returned to the wrongful owners.

Given that director Renny Harlin is at the helm, there should be no real shock that the second half of this film looks a whole lot like his Die Hard 2, only with Gabe a poor man’s John McClane, and Qualen a broke man’s Hans Gruber.

Stallone has his guns in full roided effect and his lip perpetually snarled with determination, and the old school stunts and miniature effects are refreshingly retro in this age of computer generated everything, but it isn’t quite enough. Admittedly his and the film’s progress are hampered by the hamminess of Lithgow as the so called criminal mastermind, whose only evil genius credentials seem to be a vague European accent and a severe case of self confidence.

Films like this need a solid hero and a solid villain to make it work, Cliffhanger is half way there.

While I try to throw a joke or two into proceedings when I can all of the opinions presented in my reviews are genuine. I don't expect that all will agree with my thoughts at all times nor would it be any fun if you did, so don't be shy in telling me where you think I went wrong... and hopefully if you think I got it right for once. Don't be shy, half the fun is in the conversation after the movie.
View all posts by OGR →
This entry was posted in Film, Movie Reviews, Sly Stallone, Superstars, The Grey Area. Bookmark the permalink.