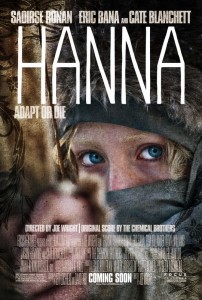 There are more than a few similarities to last year’s Salt in Hanna.

She too was raised in particularly hard circumstances, with her everyday routine starting with hunting, weapons training, and hand to hand combat, and concluding with languages and general knowledge, including whale testicles…

Tough right? Well might I add that Hanna also grew up in a remote shack with no electricity or mod-cons, and that she was randomly set to by her ‘Pa’ Erik (Eric Bana) with surprise attacks to test her, that she had never heard music for herself, and that she is all of 16 years of age…

One day Hanna tells Erik that “I am ready”, and a signal is sent to the authorities that sets in chain an elaborate and deadly chain of events. The next day Erik sets off to places unknown to all but he and Hanna, and Hanna stays alone in the cabin.

That night the cabin is descended on by an extremely heavily armed and well trained team of soldiers and Hanna is taken away for testing and questioning. She asks but one question “I want to see Marissa Wiegler” (Cate Blanchett – channeling Australian Prime Minister Julia Gillard – only with an aurally painful US accent). The brief meeting set up as a result of the request ends with Hanna performing a practically impossible escape, eluding dozens of trained security personnel and such.

It is not fair to the film to go into much more detail, but I can say that Hanna finds herself in a foreign land, alone, with no support and a seriously testing journey ahead of her. She is especially taken by a fluorescent light in Morocco, something previously only imagined, and TV proves to be frankly too much to take – where reality TV is concerned I wholeheartedly agree. Erik too is on the move, and Marissa and a small but dangerous team including a flamboyant gay man and two shaven headed neo-nazis are also in pursuit.

Hanna finds unexpected transport and support in the form of a free thinking family (I would call them annoying hippies myself), and she instantly bonds with the precocious and outspoken teenage daughter (if I was the father of this girl I would think it better if Hanna never left the hut surrounded by ice).

I really enjoyed the first half of the film, nothing is spelt out to the viewer and a solid foundation is built which suggests the second half should end perhaps better than it does.

The action sequences that punctuate the second half of the film are generally short and sharp, but pretty effective, even if they are backed at all times by what I would refer to as watered down techno music. (I subsequently found out the score was done by The Chemical Brothers… disappointing.)

It is as if at one point the filmmakers thought ‘that’s enough, let’s tell ‘em’ and the entire plot unfolded over a span of minutes in a finale that was as brief as it was implausible – and it was quite brief.

Again I liked Hanna for the most part, the better stretches are essentially a more credible version of Salt, the problem is that the latter stages are almost exactly the same as Salt.

This isn’t the end of the world, it’s just that it could have been much better.

Final Rating – 6.5 / 10. A solid foundation is left wanting once credibility and reality is to be replaced with formulaic thrills and spills, leaving us with Hanna (Montana) Salt.