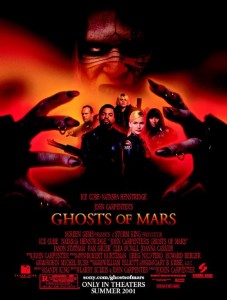 Seriously kids, it really is as crappy as the poster makes it look.

I was channel surfing one evening and saw that this was coming up, now normally I would never bother, as I have seen it once and know it absolutely sucks, but for the sake of my regular reader I thought I would suck it up and revisit this crapfest.

John Carpenter is the ultimate Native American Indian, even though he isn’t. I am pretty sure that he never writes anything down that doesn’t end up in on screen. This leads to some great movies (The Thing, Escape From New York, Halloween and Big Trouble in Little China) and unfortunately some rubbish (Escape From LA, Prince of Darkness) aaaaannnndddddd……. THIS!

I’m pretty sure Carpenter was doing a spring clean and came across piles of cut plot points, aborted ideas and things deemed unfit for earlier films, and he thought “Fuck it, maybe I can get some idiot to pay me to make a movie about all this crap.”

And being Hollywood someone did. No wonder after this Carpenter left the movie landscape for many years. In defence of Johnny, by putting his “John Carpenter’s” in front of any title he is essentially saying to his audience, fans and critics alike, that “I did this. You don’t like it come to me. He should have rethought that technique on this one, or maybe called it “John Carpenter’s I Need a Vacation”.

They summoned the ultimate B Movie cast, none of whom have ever carried a decent movie on their own:

There is so much wrong with this that I am not sure where to start. The budget made me feel like Jay when he sees the Bluntman and Chronic set for the first time and says “Well that looks like it set ’em back a couple hundred bucks.”

The special effects in this are straight cheese. The fight scenes are as well choreographed as a Year 2 parent’s night stageplay. They use the 80s music clip technique of heavy backlighting through billowing fog (from smoke machines), and the acting is in the vein of el cheapo soaps. Oh yeah and the plot is straight cliched shit.

Aside from that Ghosts of Mars is a worthwhile addition to John Carpenter’s legacy.

I’ll kill 20 seconds of my life discussing the plot. Henstridge is a cop in charge of a “routine prisoner transfer” from an isolated mining outpost, only it goes wrong. The prisoner is named Desolation Williams, and is played by Ice Cube, one of the least threatening guys going around. Seriously take the gat off him and that snarl isn’t deterring anyone from gettin’ up in his grill.

Anyway the police team gets there and the place is deserted, with signs of a struggle, apparently the only survivors are the prisoners who were sealed off, (I guess). It turns out that most everyone else is infected by a disease that inexplicably makes them dress up like an extra from Mad Max 2, The Crow, Conan or a Nine Inch Nails video. This was caused by a weird fog-storm that turns some prisoners insane in the membrane.

Some blah-blah-blah stuff happens, none of it worth telling here, but this crap all leads to one of the worst fight scenes in film history. Seriously “The A-Team” had better stunts on every episode, the violence is met by reactions that suggest “Oh gee my arm has been severed, how surprising.”

As far as choreography goes, there is no ‘Jackie Chan 25 seconds with no edits involving 50+ moves and 5 or more fighters’. Here we have 2 awkward and obviously missing hacks or punches, followed by a cut, and background actors

The ending mercifully arrives, and boy does it suck. In keeping with my policy of not deliberately spoliing movies (even though this was spoiled to begin with), I will not describe the suckage that completes the film, suffice to say that it finishes with a freeze frame shot.

Cue desperately bad 80s rock, even though this was released this decade.

Final Rating – 3 / 10. This would be laughable if it wasn’t so laughable. Unless you can come up with a drinking game and feel the need to get reeeelly drunk, avoid.

While I try to throw a joke or two into proceedings when I can all of the opinions presented in my reviews are genuine. I don't expect that all will agree with my thoughts at all times nor would it be any fun if you did, so don't be shy in telling me where you think I went wrong... and hopefully if you think I got it right for once. Don't be shy, half the fun is in the conversation after the movie.
View all posts by OGR →
This entry was posted in Crappy Movies, Film, Jason Statham, Movie Reviews, Superstars, The 7th Level of Suck. Bookmark the permalink.