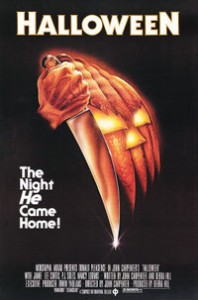 When John Carpenter made Halloween in the late 70s he practically redefined modern horror. This seems strange now, when Hollywood can scarcely go a month without releasing yet another ‘bad guy stalks pretty young girls’ film.

It’s easy to see how this film influenced others though, it is well made and boasts extremely patient pacing, which must’ve kept the audiences perpetually on edge.

It’s harder to see how this was ever truly scary…

The film opens in Haddonfield, Illinois in 1963. It is Halloween and in one long unbroken – mostly dialogue free – scene we meet young Michael Myers for the very first time carrying out his very first kill. And by young I mean around 6 or 7.

The next time we meet Michael he is in the process of escaping from the psychiatric hospital which served as his home ever since that initial ‘unpleasantness’, in a bizarre scene indeed. Dr Loomis (more on him later) and a nurse are headed to the mental hospital that has served as Myer’s home/prison since his youth. As they approach in the  pitch black darkness and driving rain they can see several ‘free range’ patients roaming about in their whites.

After pausing to ponder if this is usual practise Myers commandeers the vehicle and drives off. As Loomis himself later wonders, it isn’t a bad effort to be a skilled driver seeing as you’ve been locked up since you were 6…

So where does a social menace go to savour his first taste of freedom in over a decade? Home of course. Back to Haddonfield. But things done changed just a little, the Myers’ residence is a little run-down and something of a haunted house already to the local kids, which is only exacerbated by the fact that it is once again Halloween and tykes are scampering about collecting lollies and otherwise getting up to mischief.

The good Dr Loomis shows and heads immediately to the local police. He knows just what is coming having dealt with Myers for years, and he tells anyone who will listen, which is practically no-one. Even the police only show a passing concern at the potential psychotic killer in their midst on the night that practically every kid is roaming the streets at night…

For some reason Myers headed all the way home to try to kill random strangers, in this case three young schoolgirls, one of whom is conscientious and sensible, Laurie (Jamie Lee Curtis), and two who are, for lack of a better term, sluts. 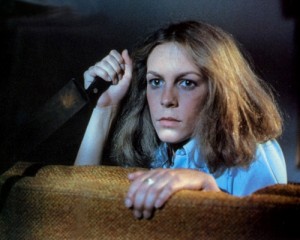 This solid build up slows dramatically from here during the mid-section of the film. In short Myers dons a boiler coat and the admittedly eerie melted-Shatner mask and spends what seems like eternity lurking in the edge of every scene.

He’s practically everywhere! Standing. Watching. Looming silently. Always where those that he is observing will be or were just – but rarely where they are – looking.

Once Michael finally makes his presence felt things finally get to moving, the finale involves the (what has become) usual stumbling, screaming, sobbing and stabbing, with a slow shuffling Michael always a step or two behind the fast moving prey. Michael himself takes a licking but keeps right on ticking, something that he only got better at the further the unnecessary sequels went.

Halloween is rightfully renowned and still pretty effective – if not very scary – in the present day. The piano tinkling score is unnerving and like a video game seems to signify that Michael is in close proximity. Donald Pleasance and Jamie Lee Curtis add credibility to the film with sincere performances – in fact the entire film is far less campy than many of its peers from the 70s and 80s – and the film helped write the modern slasher rulebook, notably the sections that demand pretty teens who covet alcohol and sex must be killed, and the fact that a slow shuffling pursuer somehow always manages to catch the fast fleeing teens.

Final Rating – 7 / 10. Like fine food in expensive restaurants I can appreciate Halloween for its quality and better attributes, but like the flash meals it just isn’t my bag and the scary portions are just too small to satiate me.