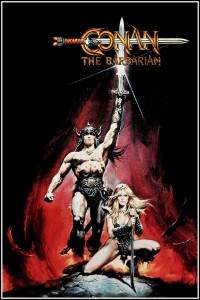 The poster that launched a thousand mulletted advances.

Given what follows it is quite amazing that Conan the Barbarian opens with a quote from Nietzsche.

When Thulsa Doom (James Earl Jones in a Jessie J wig) lays waste to young Conan’s village and leaves him holding the hand of a decapitated mother, he should have expected reprisals of some sort.

Apparently not. Instead Conan was taken to a harsh land where it was apparently always winter and forced to push a giant sideways hamster wheel. For ten years. The net result of this seems to be a Mr Universe physique and – I would expect – some slight dizziness.

A now grown-Cone is then schooled in the killin’ arts. Slicing and dicing his way through hordes of opponents before escaping and going solo to roam the lands in search of the snake worshipping cult of Thulsa Doom, and his revenge.

It takes a while. Along the way Conan bangs a crazy electric witch, kills a giant snake, punches a camel and trades nibbles with a vulture. He also dies momentarily and makes a few friends who join him on his trek. 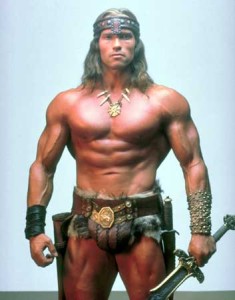 A young Arnie is especially buff and wisely has a word limit imposed upon him, he has an entire relationship with a blonde that spans over half the movie, during which he might have said two things to her, one of those being “do you think we should hire a maid?”… Or not.

Contrary to my teenaged mind Conan is actually pretty epic even if it is not always up to the challenge. The film runs for over two hours, has scads of extras, a few impressive battle scenes and an impressive score. It joins The Good, the Bad and the Ugly as films in genres that I don’t care for, but which nonetheless manage to be the best examples of type.

Final Rating – 7 / 10. Where The Good… does the job for westerns, Conesy should be a prime example of mindless leather pants movies. 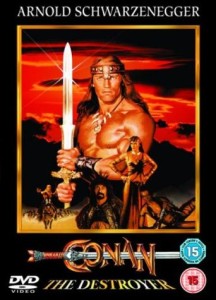 After the unlikely success that was Conan the Barbarian it was inevitable that Arnie would be convinced to don the itchy codpiece and oil the twitching muscles one more time.

Unfortunately in striving for a wider audience the powers that be decided that this time around Conan would be a tad less violent and just a little more accessible. That might help the initial box office, but it doesn’t do much for the film’s longevity. Conan the Destroyer looks to provide more of what made the first film work without ever improving upon it in any way.

This time around Cones has a large crew along for his trek, a thief, an enforcer (NBA legend Wilt Chamberlain), a wizard and a half nekkid Amazonian Grace Jones. The mismatched posse is tasked with escorting a beautiful young princess – and her sacred virginity – from A to B, but nothing is easy with such things, huge ghost birds and the like have a way of ensuring that.

The film lacks the ‘what the? weirdness that peppered the first – even with the zany cast – and definitely the teen satisfying bloodshed and violence. Instead the unlikely Fellowship of the Promise Ring navigate the landscape all awaiting their turn to shine, which of course they all get. But nothing ever seems any more than contractual. The jokes seem forced, the action mostly uninspired.

The glee from ‘Barbarian’ emanated for the sheer over the top silliness of it all. The testosterone tinged action and the big burly behemoth of a man. When you set out to recreate such things in a PG setting, testosterone simply cannot be as big factor. Without this ingredient, you rely on the charisma, comic timing and acting ability of a lunatic singer, an NBA star, a couple of B actors and the ex Mr Universe. Does this really sound promising?

Arnie has never been less wooden. Without the blood n guts, his only moment to shine is when he again gets to punch a large mammal. No not Grace Jones, a horse this time around. And then shortly after for good measure he punches a camel. Again.

With such inspiration and creativity in plain view it’s no small wonder that this series never culminated in a trilogy. A good thing too, because if Arnie had remained Conan for years to come, we may never have had Terminator, Predator and True Lies. So there is a definitive upside to this film’s obvious downside.

Final Rating – 5.5 / 10. The curse of commercialism strikes again. One can only punch so many large animals before the audience tires. Actually one large animal apparently…