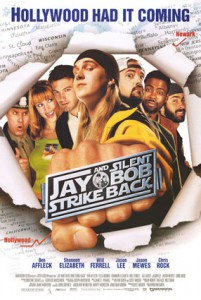 When I decided to do nothing but comedy reviews for a month I had a quick look at my DVD collection and was surprised that there aren’t that many pure comedies in there. Sure there are plenty of action-comedies and horror-comedies, but not many that I think of as being made with 100% laughs in mind. 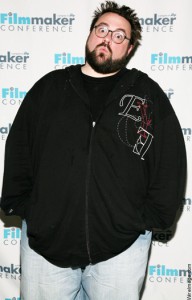 “Now boarding the other half of the flight… Kevin Smith.”

The one guy that has pretty consistently come up with the goods in the last decade and a half is “too-fat-to-fly Kevin Smith”. Since Clerks in the early 90s he has churned out a new film every couple years or so, most of them were at least alright (aside from the J-Lo thing) until Cop Out. Which left me with severe doubts as if he can possibly bounce back.

Put another way there is a distinct possibility that Kevin now thinks pointing a camera at famous people is enough to make a film, in his defence it worked for Kim Kardashian and Paris Hilton, though they were both nude at least.

Back only a few years though Big Kev was at his most self indulgent, releasing a film that was basically a road movie featuring cameos from every famous actor that he had ever met or worked with. Jay & Silent Bob at the essence is stupid comedy, no orifice is left unturned, no joke too low, no potty talk too filthy and no bodily function ignored.

But stupid comedy is rarely this funny. 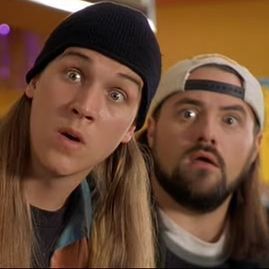 The plot: Jay and Silent Bob had a comic-book based on their lives. The comic-book was turned into a film without their knowledge or consent, so Jay and Silent Bob decide to forego any potential cash from the project in favour of canning the thing entirely. Rather than make a phone call or send an email they decide to set off from one coast of the United States to the other.

And if you don’t understand it all there are three hotties in tight outfits… and Kevin Smith’s missus who tags along with them (sorry Kev).

I think it is more a by-product of making a film with a massive cast but this film has the best performances by Sean William Scott, Ferrell, Morgan and Chris Rock in many years, only because none is asked to be onscreen for more than 20 minutes at most, as they are all equally tiresome when you realize that their initial shtick is all that they have. Ferrell has already started to feel the backlash at his tired antics, Chris Rock hasn’t been a draw for… ever aside from stand up and Morgan’s drop is rapidly approaching.

Ask Kevin himself, he cast Morgan in Cop Out and said “Action” which helped me prove just that.

Final Rating – 7 / 10. More a series of random encounters with famous people peppered with jokes than a film. But I have to admit I laughed quite a bit, once at Ferrell!