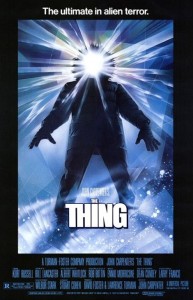 That looks more human than “thing”. Still, hard to depict a “thing” I guess…

I never watched The Thing through all the years when it would probably have had the biggest impact on me, I think I was about 28 or so when I got around to seeing what the fuss was about. I think though that this would have fucked with my mind in my late teens, it sorta did anyway in my late 20s.

This was John Carpenter in his hot streak, when he actually mattered and was vaguely consistent. I have claimed before that Carpenter either got lazy or extremely lazy in the last 20 or so years, releasing a far higher ratio of shit films than even fair to middling ones. Put another way, I can’t be bothered watching anything he has made since They Live from 1988, and even that was more for gimmick value.

But in the late 70s and 80s Carpenter tore shit up. Many rank Halloween as the pinnacle of horror let alone Carpenter’s career, but I don’t think it has aged nearly as gracefully as this flick and it just isn’t as entertaining as any of the big three films made with Carpenter’s muse Kurt Russell; The Thing, Escape From New York and Big Trouble in Little China.

Still better to have ridden a hot streak for 15 years and then faded away than never having been any good at all, something that I think the current day version of John Carpenter Zack Snyder is in serious danger of doing after a bright start and not much since.

The Thing opens with a brief “don’t walk off to get the chips and drinks yet” scene where an alien spaceship of some kind moves into the Earth’s orbit, something copied by Predator and more recently Slither.

Cut to Antarctica, a helicopter is chasing a dog, and apparently losing, even though it is a helicopter. The dog fortunately comes across probably the only inhabited part of Antarctica in 100s of kilometres, a US research station of some kind.

So the chopper blows up, but not before a guy gets out and has a ping at the doggie. The US station is obviously an RSPCA centre, and they gun down the shooter in “self defense”. The dog is of course adopted by the Americans.

So the interest of the US base is piqued, they identify where the helicopter came from and head on over to check it out. They find nothing out of the ordinary, the other base has been torched, there are dead bodies lying about and one weird, distorted human-ish body.

Meanwhile, back in the US ranch, the runaway dog is placed with the other station dogs.

Needless to say something is a little amiss. It transpires that there is a being inhabiting the dog (probably from the UFO I reckon!!!), one which absorbs any living thing it comes into contact with and can then replicate anything it has dealt with prior.

This is where things heat up. The Thing has some of the freakiest special effects seen in any movie made before CGI became available, and there are many different scenes showcasing some of the most out there, wacked out SFX possible.

The strength of the movie, beside the SFX that is, is the gradual build of unease and paranoia between the inhabitants of the station. Anyone could be the Thing, regardless of how they are acting and what they say. Of course this means that accusation fly left and right, previously tenuous relationships are shattered and the dozen odd personell divide into factions. Among them is Kurt Russell as MacReady, the helicopter pilot and probably the most logical among the team.

Russell is pretty powerful in this role and demands attention, but in saying that the rest of the cast are uniformly good, even those with bit roles that are basically just red herrings waiting to play host.

It becomes evident that there are global consequences if the “infection” escapes to the mainland, so the survivors are faced with some tough decisions. The ending is suitably downbeat but suits the tone of the film. I can’t imagine having 90 minutes of despair and gloom being redeemed with a “sunshine and rainbows” finale.

Scanning over this I can see that it hardly seems like an all-time classic on paper, but even 27ish years later The Thing sets itself apart from countless pretenders before and since with strong acting, groundbreakingly over the top SFX, shocking set pieces and an ending that actually adds to the solid first two thirds of the film.

Final Rating – 8.5 / 10. If anything this is a better film now than it would be if made today. I can’t see that current day Hollywood would have anywhere near the restraint that they showed for the most part here.