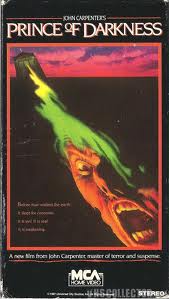 A priest and a professor talk. Fervently.

There is a big lava lamp filled with green goo in a small Los Angeles church. A strange book is found nearby, filled with confusing contradictory passages, numbers and overlapping writings.

Something in the church is drawing people to it, hobos mostly. It influences their behaviour, initially causing them to stand motionless and stare. Insects appear in small random piles.

Apparently ‘it’ is stronger again – you just have to feel. (The only way we can tell is that the music becomes more ominous.) More bugs; worms and ants mostly. More hobos.

A pigeon is crucified. Alice Cooper kills a science nerd.

Something grows in the goo tube. An investigation shows that the tube can only be opened from the inside. The translated goo-tube manual sounds either ominous or stupid… actually cancel ‘ominous’.

More portentous yet snooze inducing chat. Apparently ‘these readings are off the charts’. No-one ever mentions what the readings are from…

But they’re off the charts.

The woman who got spat on stares vacantly. More bugs. Alice Cooper! Anyone who sleeps in or near the church shares the same TV dream with poorly recorded voices.

Spit-woman spits on another woman. Spit-Woman #2 learns to type very fast – but only “I Live” repeatedly. Spit-Women #1 and #2 knock down a tall black man and commence what looks like the early stages of the coldest, driest, most dispassionate three way in history.

More blather. A man appears. His head falls off, only to turn out to be made of bugs. His headless body crumbles. More bugs. Highly organised, well dressed bugs.

A marked woman is spat on and falls pregnant. The Asian bloke from Big Trouble in Little China is locked in a closet – I feel sorry for him. More hobos.

The pregnant woman is no longer pregnant. No reason is given. She doesn’t look so healthy but now has more energy. More spitting.

The old Chinese guy from Big Trouble in Little China and Tremors tries to deter a mindless attacker by shaking a Sprite and spraying him. Doesn’t work. The chopstick in the eye proves more effective.

A woman crawls through a wall and is beaten with bricks. The phantom pregnant woman finds a demonic mirror and laments how run down she appears, before moving to a bigger demonic mirror.

Bright lights. A severed arm. Decapitation. Neither work. Then something does.

Final Rating – 3 / 10. Never has something so bland, so pointless, so undeserving and so god-awful, been so much of all of those things.

John Carpenter made The Ward, Escape from L.A. and Village of the Damned. Prince of Darkness is John Carpenter’s worst film.