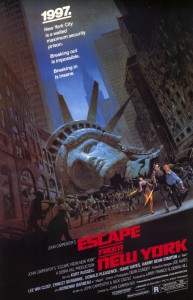 Damn dirty Apes did it again!

I have toyed with the idea of having a “Coolest guy in the Room” concept where I occasionally drag out a year in film and pinpoint who exactly the baddest cinematic creation was in that particular year. When I read a review of The Town recently which highlighted how good Jeremy Renner was as Jem because of what he said rather than how he said it, I thought the concept would work just as well for the Oscars.

Imagine Sam Jackson and Tarantino walking up to the stage in 94 to collect the award for Best Original Character for Jules, Tarantino for creating the role and Jackson for becoming the living, breathing physical motherfucking embodiment of it.

Anyway moving on… for a time Kurt Russell must always have been in the (hypothetical) discussion, especially with John Carpenter writing his lines and crafting his roles. MacReady from The Thing, Jack Burton from Big Trouble in Little China and Plissken… Snake Plissken.

Snake Plissken was such a good character creation that he actually deserved a better movie than Escape from New York, not that ENY sucks, it’s just that Plissken is potentially an All Time classic character, while the film he appears in is merely a solid 80s flick.

Snake is a mulleted, eye-patched, tattooed, super-cool whispering assassin. The problem is in this film he has an inferior platform on which to display his wares. 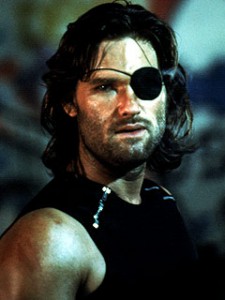 Put another way, if Stallone came up with Plissken we’d be getting ready for Snake 7 where a geriatric Stallone must kill more people against his will… yet again. Stallone knows how to milk a character, all Carpenter got out of Plissken was a solid first film and a lousy sequel.

Anyway in this particular film Manhattan Island is walled off from society, the inhabitants being dangerous criminals trapped inside with no hope of release – they are there until they die or are killed by the other more nasty inhabitants.

Snake himself is due to be inserted into this death trap, where escape is met with instant death from all sides and staying put is met by constant threat by all in-sides. Only on this fateful day the President of the United States himself crash lands within the walls and is taken, along with vital information that only he knows that is required to save the world – or something – we are never explicitly told.

Snake is taken aside and informed that if can locate and save the Prez within 24 hours he will be given an unconditional release, if not his head will explode.

So after a slow build Whispering Snake takes a glider and lands on one of the World Trade Center towers (costly prison), once in he must avoid roaming gangs of guys whose look is best described as homeless-punk-pirate, and random acts of violence perpetrated by guys with funny John Carpenter-film names: The Brain (whose girlfriend is more cleavage than woman!), The Duke (Isaac Hayes in the most innocently racist car I can think of), Cabbie (Ernest Borgnine) etc… 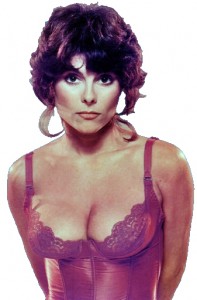 My eyes are up here… Oh who am I kidding – Just look at ’em!

What follows is quite straightforward, Snake must work out who will actually help him and who means him harm, and with time running out how exactly to find the Prez and get him out safely.

The film is entertaining but harmless.

One thing about John Carpenter films: the man can take $12 and make it look like he spent $17. That is indeed meant as a compliment, but even when comparatively “cashed up” it seems Carpenter was never given much to work with. The costuming all looks wacky and way out in a Mad Max 3 way, when you would thing that in reality the inmates would spend a little more time looking deliberately disheveled and be a little more concerned with their day to day wellbeing – but I guess this isn’t reality anyway, so perhaps guys dressed like homeless-punk-pirates is just as appropriate. Also the background all looks suitably cool and authentic, but it’s just all a little shiny and clean, at times coming off like a videogame. During the film I kept thinking of the original Left 4 Dead game.

I dunno, I think Big Trouble in Little China was more fun – and better – and that The Thing was infinitely better and a genre classic, so perhaps Escape from New York really only suffers from comparison. It is indeed better than many other 80s flicks and is still fondly remembered (thanks to Snake mostly), so that’s a plus, I just think it could have been so much better.

All that aside though you put those four films up and add Halloween to the mix and it is inarguable that Carpenter had a most enviable track record in the 80s.

Final Rating – 7 / 10. Hasn’t dated well over time, but Plissken remains a classic character deserving of a better film to appear in. Watch it for him – just don’t tell him you thought he was dead – everyone does that.