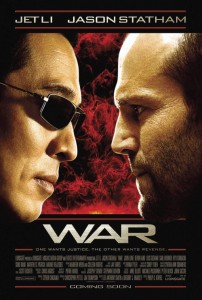 The DVD menu page used both titles, so Rogue Assassin (War) it is, although from here I will be using the mercifully shorter War.

I recently watched Ghosts of Mars, which is clearly B-Movie hell. this is almost B-Movie heaven, but it is not without many flaws.

In “Ghosts” the only credible actor was Jason Statham, and it was his very first US made film, here we have Statham in his prime and Jet Li still in reasonable shape at least, (although not a patch on the Jet Li of Kiss of the Dragon or the earlier classic Fist of Legend).

We start with the good ol’ classic scene introducing John and Tom which shows that they are more than just colleagues, dammit they’re buddies. So of course a few minutes later not only does Tom predictably enough get shot to fuck so does the rest of his family, this also serves to tell us that the bad guy, named Rogue is a real brutal bad guy.

Apparently there is a clear cut Yakuza district in whatever city this is set, there is also a Triad district. I find this odd that there are clearly defined crime gang areas, and that the cops still can’t find them! There is a shoot up in the back room of a Yakuza nightclub, and it turns out that Rogue is the perpetrator. Enter Statham as John, the head of the Asian Crime taskforce, apparently Rogue has been off radar for some time, so they are pleased to get the chance to have a crack at him.

They identify some of the basic traits of Rogue:

– He has no loyalty to any crime family or gang.
– He changes appearance regularly using plastic surgery.
– He works for whoever pays him, (Last Man Standing style).
– He looks an awful lot like Jet Li.
– He wears exactly the same suit through the duration of the film and drives around undisguised.

So in the middle section of the film, there is double and yes triple-crossing, witnesses killed just as they are about to spill their guts, and both rooftop and car chases galore. Oh and every movie that deals in Asian culture that is made by non-Asians has them playing mahjong incessantly.

The problem that I have with War is that the makers tried to over complicate things without ever thinking “Hey this is just a B-Movie, let’s not push our luck and go too far”. Yet that is exactly what happens, working out what was going on and who was currently the good guys got boring quickly, and I lost interest.

A meeting is set up which ends up as a gang war between the Yakuza and the Triads which if course escalates into a gang war.

A good B Movie should tick most of these boxes:

Ultimately I thought that the twist near the end of War was actually OK, just the previous 45 minutes of pointless yammering and back and forth-ing was too much for me to take, especially as it was after 11 pm, which is the scientifically proven correct time to watch B-Movies, either that or around 2 pm on a Sunday arvo.

Final rating – 6 / 10. Too try-hard clever for its own good, War doesn’t have anough action, fight scenes or quotable stuff to justify your time. Watch Red Heat or even Rush Hour instead, at least they’re funny.