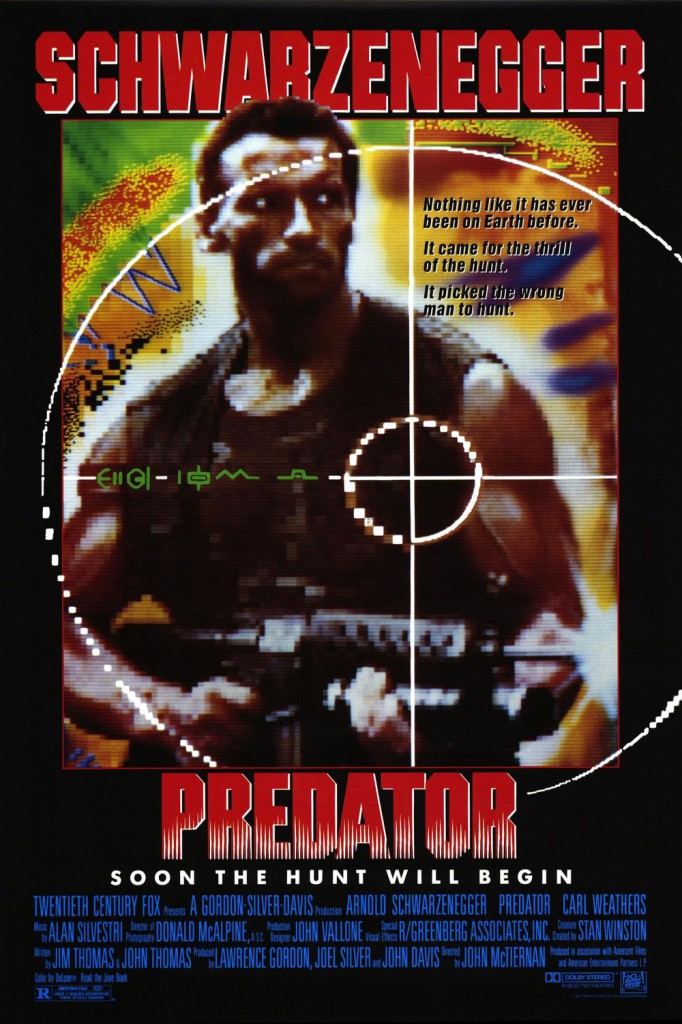 “I feel so unfocused today…”

Aaah the 80s. The decade of the stupid jock.

What a great decade to be a teenage boy it was: Sly, Jackie Chan, Van Damme’s (brief) career high and another new wannabe action star vehicle being released seemingly every week… but all the time there was Arnold.

Conan – Terminator – Commando – Raw Deal – The Running Man – Red Heat – Predator – Total Recall! Never before has a man turned so few syllables into so much cash, so little ability into so many rewatchable hits. Every sub 40 guy instantly forgave every terrible joke and every botched line as soon as he churned through the next batch of largely interchangeable bad guys. We cheered at every wink or raised eyebrow as if we were on the joke, and if Arnold said anything even vaguely self-deprecating we lost our collective shit: “Do you think I still pass the physical?” “Wooh-hooh Arnold, but you’re huge! Of course you do!”

Now we live in the Tennies. In the Tennies it is no longer appropriate to be dumb and simple (yet entertained), we need more – apparently, at least that is what the critics keep telling us. Nowadays “Big Dumb Action” is not likely to be put on the movie poster, as nothing Big and Dumb could possibly be entertaining, but my counter argument might be what about reality TV? OK bad example, there is nothing entertaining about reality TV.

If the 80s was the decade of the jock, then the Tennies seems destined to be the decade where the Nerds take Revenge.

Examples? The last few years have given a generation of teenagers the wrong impression:

9 foot blue heroes where the White-Man is the bad guy?

What has gone wrong in this topsy-turvy world? Anything taller than 6 foot needs a crew cut and an M16, and they better speak English in a wonky accent. AND ONLY ENGLISH. I ain’t readin’ no durn words in mah moofies.

Predator harks back to a simpler time, when anything non-human needed a bullet, or better yet thousands, and the musclier you were the more likely it was you would win.

Arnold is Dutch, and he and his team of well muscled meatheads with names like Poncho, Blaine, Billy and Mack are venturing into the deep jungle with Dylan (Carl Weathers) in tow to represent the brass. This well trained and professional unit are used to this though, this is their job, they actually move through the dense jungle like soldiers not cowboys, everyone moves in unison without instruction aside from a quick whistle and a point or signal where necessary. I can’t stress this enough, nowadays if someone refers to a “crack unit” we are supposed to just swallow it as truth, which is why we have an A Team with a geriatric old man in charge and a plot that was supposed to be intricate but was dumber than most “Big Dumb Action” plots. 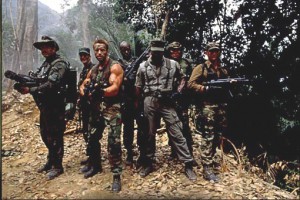 All with a side-order of beef.

Moving on, Dutch and co are on a search and rescue mission, only very early on they find there is precious little worth rescuing, and that most traces of those that needed rescuing will fit into a couple of jam jars. There are no tracks and little evidence that the deceased knew what was happening even as it happened… which is a concern to Dutch as the victims were all highly trained soldiers.

As they continue on their mission it becomes evident that they are all being watched, Billy their Indian (looking at least) point man seems to twig first, he is Indian after all, and the right kind! My internal editor has advised me to provide some clarity, what I meant to infer was that there aren’t too many examples of excellent soldiers in films with names like Ravi or Duleep, but if you come across a guy named Sneaky-Wolf or Dakota-Joe and you can put money on him that he knows the way.

After a pretty great gun battle where the good guys slaughter the bad with no casualties aside from a scratched arm (thank the Lord that Blaine “Didn’t have time to bleed”, that could have been serious!) the crew continue through to the extraction point with a young female hostage in tow. This is where the movie gets good-er-er.

The previously unseen onlooker progressively becomes more evident, either he is lazier or they just thought the “clickle-lickle-lickle” sound effect wasn’t going to be enough on it’s own. In saying that though I guarantee if you play that two second grab to any guy under 50 and 90% of those guys will instantly recognise the origins, the other 10% are re-watching Avatar for the 11thtime and spanking it to the 8ft Zoe Saldana creature. Prove me wrong sticky hands!

The Predator tracks the soldiers using a heat registering device, initially he is content just to watch and learn. He apparently has a sense of fairness and only hunts those that might prove a worthy adversary, therefore the unarmed are left alone. The Predator “Ain’t ferm around heyre”, that much is obvious, it engages sophisticated cloaking devices to blend in with the surroundings, which means that only the audience can see it most of the time for some reason.

After the initial kill there is a brief sighting that leads to approximately eleventy-three kajillion rounds being unleashed, levelling an area that I think now is used to graze the entire MacDonalds herd.

From this point the Predator turns serial killer, picking off the soldiers one by one and taking various trophies for himself (think spines and skulls rather than earrings and wallets), he is a seemingly invincible killing machine that appears destined to kill off the entire cast without so much as breaking a sweat.

We learn because the female hostage tells us that “only in the hottest years this happens”, and that the Predator is essentially a game hunter here on a bit of a safari of sorts. The news that this is simply a lark for him is a sobering thought to the trained soldiers he is toying with, so Dutch decides that they have no choice but to kill it. Bold words, but a few minutes later and it is a 1 on 1 battle between two huge gargantuan looking behemoths, one an alien incapable of discernable speech who communicates in clicks and grunts, the other is the Predator.

The Predator itself looks like a rasta-crab complete with dreadlocks and four alternately moveable fangs, I’m not sure how the creature effects were done but for 20 + year old work they are pretty masterful and seamless and hold up extremely well today, in fact the effects on the AVP movies are distractingly dodgy or in some cases CG, strange given that technology should make things more convincing.

The final fight involves Arnold taking it Ol’ Skool and eschewing weapons to rely on his wits and primitive fighting methods, that should be a problem but after the biggest preparation montage in cinematic history the Big Dumb Action sequence that closes the movie is excellent and caps of proceedings nicely.

It should be noted that there are three main reasons why the original Predator film has held up so nicely:

1/Arnold is at his super-buffest and most action-friendly. At this stage of his career Arnold knew he ruled Action films and is totally convincing as perhaps the only thing that might be able to kill the ultimate killing machine. 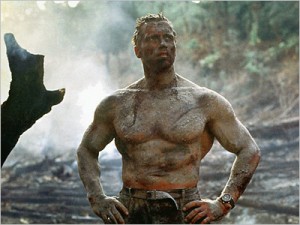 “Out the left window you’ll see the rare Buffalupagus!”

2/ The Predator itself, a super-cool creation (like the Terminator) that is both scary, daunting and admirable, a worthy adversary and after the Terminator almost the ultimate bad guy. It most definitely helped that the creature design and effects made the character totally convincing and realistic.

3/John McTiernan as the director plays the entire thing out with a deft hand by taking everything seriously, the soldiers move in a realistic manner so that we forgive the fact that 6 guys can take out 60 heavily armed bad guys with nary a scratch. This adds more weight to the abilities of the Predator when he starts picking off the super-soldiers one by one. McTiernan has been a little hit and miss over the years (Rollerball anyone?) but with this and of course Die Hard his legacy is inarguable.

Often imitated but never bettered, Predator is an awesome action sci-fi experience. Rather than watching the Danny Glover sequel (OK) or the new Predators reboot (also OK), or the excrement that was AVP and sequel, check out the best. First.

Final Rating – 8.5 / 10.Big Dumb Action is very rarely this Fun. There’s a reason why the Clickle-lickle-lickle sound effect and the washed out heat vision the Predator employs are so memorable to so many guys. They are Awesome.