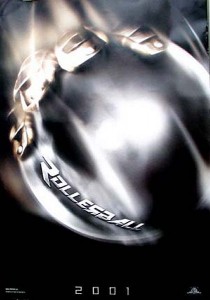 Rollerball is universally acknowledged as a bad film, and golly gee boy howdy is it just that and more. So bad that I cannot fathom how John McTiernan, the director who made Die Hard and Predator in the 80s, somehow managed to add this to his CV in the same lifetime without a major head trauma somewhere in between.

It starts with the cast, when Chris Klein is your lead and LL Cool J is his offsider things aren’t off to a good start…

…It quickly and amazingly gets worse though once they start explaining the premise. An underground sport which is essentially an amalgam of rollerblading, motorcross and lacrosse is suddenly one of the more tres chic and lucrative sports in out of the way Asia. In reality the sport is way more confusing than the previous sentence describes, one of the characters actually admits they have no idea what the rules are – and he was one of the players!

(And by the way many sports evolved from training regimes and things designed to improve fitness. In short, if a fake game was actually any good it would be a real game.) Rollerball as it is portrayed here will never exist.

In an ideal world neither would this film.

Nonetheless this Rollerball is the hottest ticket around, eliciting awe from the poor impoverished masses of the region, dragging in sponsorship dollars and endorsement deals and pleasing the easily pleased from all over. Those same people who might line up to see a Chris Klein and LL Cool J film I would think…

By the way I won’t be referring to character names as I refuse to absolve the guilty parties by using aliases.

Klein and LL are among the leading proponents in this skatepark of confusion and torment, where the rules are as confusing as the costumes that the teams wear are silly – and the costumes are incredibly silly. LL in particular just seems to ride a motorbike slowly around the course, while Klein gets to look serious and determined a lot for no discernable reason.

Then ‘scandal’ strikes to the very heart of this made up sport that didn’t exist a minute ago. A player has his helmet chinstrap cut, leading to a jaw injury when… he is smacked in the face by a huge metal ball…

Now correct me if I’m wrong but two things:

1/ A chinstrap probably won’t prevent damage by a metal ball whether it hits the jaw or not.

2/ When a game with no apparent rules and no referees has its integrity compromised by a sliver of fabric I fail to see how they get away with everything else.

(Also Chris Klein’s character is renowned for not ever fastening his chinstrap, something that for some reason makes him a maverick. I mean how does he manage to stay on his skates with that thing flapping about?)

Another possibility: maybe the chinstrap was the source of the guy’s power?

But I’ve wasted too much time already. Chris Klein is aghast at this obvious travesty and reports as much to the Commissioner (Jean Reno – hang your head in shame), who says “I’ll get right on it”. Meanwhile this increase in violence and injury has ratings going through the roof! In other news, can it really be a huge surprise that the guy who profits from the violence is the guy behind it?

For his part LL Cool J tells Chris Klein “Shut up and continue to get paid”, which is exactly what the motley crew of awful actors in this film were obviously chanting at the conclusion of each day’s shoot.

Then LL gets hurt, and before you can scream “KARMA BITCHES!” we are at the cut-throat grand final of what is apparently a three game season. The difference bewteen this high stakes game and those that came before it is that there are NO RULES – which is a stretch considering it is already clear that no-one knew or cared for the rules anyway, and in any case there weren’t any referees to enforce them.

So the final devolves into a confusing mess of indiscriminate yet amazingly unentertaining violence, perplexing occurrences and indecipherable decisions – no wait that was where it started. Just know that it goes downhill from there and ends with a message that might best be summarised as ‘overthrow the guy that pays you’. Or maybe ‘Defeat non-violence with violence and receive adulation from the crowds of people that you just put at risk’.

LL has a rap career to fall back on (though that has been shaky for over a decade), Jean Reno MUST take this as a learning experience, and Chris Klein…

Rollerball is itself a remake of a film made in the late 1970s. I simply fail to see how anyone can take that material to come up with this and not have found a single way to be better than it is.

Final Rating – 2.5 / 10. Rollerball is as confusing and frustrating as the shitty fake sport that somehow justified it. It is the worst film I have seen in quite a long while, and should have ended many careers.