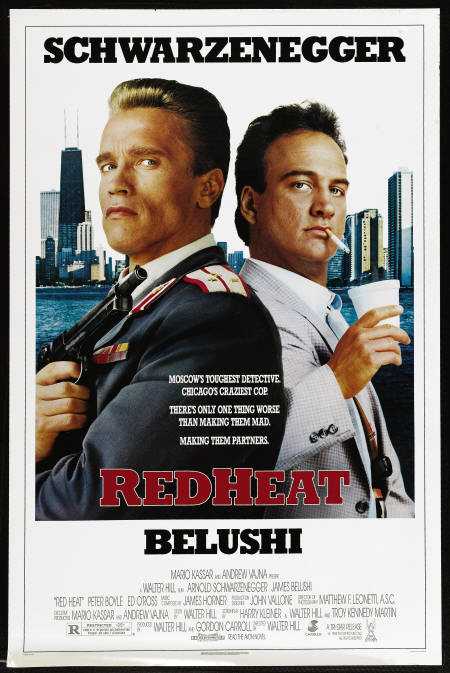 Now there’s a haircut you could set your watch by.

The main driver behind every buddy-cop flick is the unlikeliness of the buddies. In Lethal Weapon (also pretty great) the difference is that that we have an old black conservative guy with a younger anti-semitic crazy white guy. What the anti-semitic part wasn’t in the film? I could have sworn…

– In Tango and Cash it was conservative/zany.

– In Bad Boys it was black playa/black family man.

– In Rush Hour it was black/Asian.

– In Shanghai Noon it was white/Asian.

So we need some pretty major differences to justify why it is so zany and unlikely that these guys should end up partners, let alone becoming *Sigh* friends.

Well how about strait-laced regimented by the book Russian cop Vs slobby, disorganised “What’s a book” American? And did I mention that for decades Americans and Russians HATED each other with a passion.

And now these guys are partners? Wa-Heyyy. (I think Americans actually watched only because they knew Schwarzenegger wasn’t actually a Russian. Or maybe they thought he’d get shot? Whatever.)

Arnold Schwarzenegger is Russian cop Ivan Danko, and James Belushi is American cop Art Ritzig. When this was released Arnold’s star was well on the rise, with Terminator, The Running Man, Commando and Predator already behind him, and Belushi wasn’t well enough known to be annoying yet. Arnold nabs a nasty drug dealing murderer in Russia after a lengthy operation that costs Arnold a friend and the naughty Russian (sounds like a drink) his brother.

The naughty Russian, named Viktor Rostavilli (Viktor from now on) flees to the United States to broker an even bigger drug deal, only he is nabbed on a trivial crime and held for extradition. The Russian bigwigs hand pick Danko to go and personally escort him back.

In the States, specifically Chicago, Ritzig is given the shitty assignment of ferrying Danko around to make sure things go smoothly, which simply can’t happen or we wouldn’t have a movie right?

Of course Danko and Ritzig end up spending half the movie shooting at, and chasing bad guys all over Chicago, destroying much of the background scenery in the process.

The strength of Red Heat over say Commando, is that Danko is not a wisecracking superhero, he is an efficient by the book cop, playing the straight man to much of Ritzig’s rambling and sarcasm. The two have many exchanges that are amusing for the fact that they aren’t usually on the same wavelength, Danko can’t seem to grasp what Ritzig is either worried about or trying to say, and Ritzig can’t understand why Danko doesn’t think more like him, (as do all Americans). There is “Rush Hour” level marginally racist banter that runs back and forth, and the differences in the two cultures are highlighted again and again for comic relief and contrast, though never too much so that someone might get offended. In all the movie is actually quite funny, Danko gets his straight lines right so they are humerous and Belushi proves he can be funny, something that several seasons of According to Jim seems to dispute.

The action scenes are great, guys point guns and shoot instead of triple backflipping on rollerblades while throwing ninja stars. (Or whatever is deemed “cool” at present, right now it seems to be the building jumping thing called parcourt, a couple years ago it was C4 explosives etc.) So we get the satisfying sight of watching the bad guys get shot, falling over and dying, always good when the purpose of the movie is to kill bad guys.

The supporting cast is brilliant, this was the day when the filmmakers didn’t just settle for “it” stars (reality TV actors, various Kardashians) and chose career actors, hence we get Peter Boyle and Laurence (don’t call me Larry) Fishburne as cops, Gina Gershon as a women caught up in between and multiple other “oh it’s that guy” bit parts. Best of all is Ed O’Ross as Viktor, he is a genuinely menacing bad guy, and because he doesn’t ham it up or try to stand out he a great nemesis for Danko, he also has an accent so genuine that you wouldn’t know he is actually an American actor. Although since I have seen this film recently I actually recognised him in a couple of other 80s films, from memory The Hidden and Another 48 Hours.

Final Rating – 9 / 10. All the classic ingredients are here. A mismatched duo, a real bad guy, and the right mix of action and humour. Red Heat is the shit, and has been severely underrated over the years in favour of your Lethal Weapons and countless imitators.