From Paris with Love (Review) 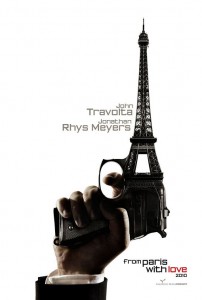 It is hard to believe that there was a time when John Travolta was likable. For the record that time started when they pulled the guns from the trunk in Pulp Fiction, and ended when they shot the guys to get the case in Pulp Fiction.

Here Travolta is the supposed comic relief to the Johnathan Rhys-Meyers straight (and disbelieving) man, though I see nothing comical or likable here.

JR-M is Rhys, an ultra-efficient political bigwig’s right hand man. He takes care of everything from scheduling events to small time espionage.

After a hard day’s spying Rhys heads home to see the missus. It is clear that they are “in lurrrve”, even more so when she pops him the Question, then the phone rings before he gets to physically “seal the deal”. (That MUST have been frustrating, there are only so many 100% sure things in life, if you can’t get a guarantee the night of engagement when are you really guaranteed?)

The Boss has decided the time is right to give Rhys a bigger job, although initially that seems to be limited to picking up a guy at an airport.

That guy of course is Mr Revolting, a rough, tough, jive talking and apparently crazy scrap of bald headed irreverence named Wax. All that is supposed to be hilarious but there is zero evidence of that for the next hour.

From there Wax dictates terms and has Rhys ferry him all over the shop for what seem to be pointless and disorganised trips and meeting. BUT DAMMIT WAX GETS RESULTS!

The first outing takes Wax to a Chinese Restaurant where within 3 minutes Wax has killed maybe 15 bad guys without taking a scratch himself and also uncovered a major drug syndicate’s stash.

Initially it seems they are busting up a cocaine ring, then covering up for the problems of a prominent politician, then preventing an assassination, then… oh fuck I could have cared less by then, the best thing about this was that it was mercifully short, not having a single meaningful thing to say will do that.

All deaths are meaningless and served with a side order of crappy macho dialogue which I guess was supposed to be snappy and clever. The total ignorance of all things logical would be laughable, expect there were no laughs to be had in this crevasse that swallows happy thoughts.

There is a Pulp Fiction callback that only served to remind you that this right here is no Pulp Fiction. I’m pretty sure you have to be a Travolta devotee to enjoy this, but really are there any of those left? And if there are surely they are middle aged women who aren’t exactly lining up to see him shoot people of many colours? As for Rhys-Meyers, he seems to lack any discernible personality, though I prefer bland to Travolting.

Consider this review “From OGR with Warning”.

Final Rating – 5.5 / 10. This film was meant to be tongue in cheek, but by the end it is index finger tickling tonsils nauseating. I would not be surprised to see that Travolta financed the film himself so he gets to see himself on the big screen one last time (fingers crossed).