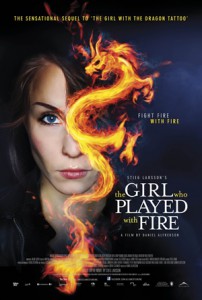 It seems she’s still quite dragon-ey.

The Girl who played with Fire is the second film in a supposed trilogy based upon  a series of novels, the first being The Girl with the Dragon Tattoo that I watched only a few weeks back. The heroine of the stories thus far and “the Girl” of the titles is Lizbeth Salander, as we need to know a little about the characters of the first film to be prepared for Fire let’s call a quick timeout to catch up with them…

Mikael – A 40 something journalist for a well respected paper called Millennium that deals with the “hard issues”. Mikael is bold and determined and has no problem confronting his subjects and posing the toughest of questions to their face. He and Lizbeth share a brief past, and he holds great fondness for her in a paternal way.

Bjurman – Lizbeth’s official parole officer, required due to incidents from Lizbeth’s youth where she attacked her own father. Bjurman also shares a past with Lizbeth that is quite personal, and not a nice one. (We see that in the opening scenes so I won’t go into detail here.) Bjurman and Lizbeth have a tacit agreement that they more or less stay the fuck out of each other’s way, this frees Lizbeth up to do what she wants without restriction, and has elicited pure hatred from Bjurman.

Lizbeth Salander – A young, skinny bogan-looking girl with many piercings, tattoos and a nasty smoking habit. Lizbeth is sexually ambivalent and often uses sex to avoid intimacy or for convenience, she does have a girlfriend named Miriam though that seems disappointed that her feelings aren’t really reciprocated. Lizbeth is frequently nude, always pasty and depressed looking and is a genius computer hacker with a photographic memory and seemingly huge powers of logic and reasoning.

And now: on with our story! It is one year on from the events of the “dragon tattoo”, Lizbeth and Mikael have reverted back to their old “before” ways, with Mikael back at Millennium and Lizbeth returning from a year of travel while things died down.

Mikael’s paper is looking into a story involving the trafficking of young women for sale into forced prostitution, many of these women are underage and almost all either tricked or simply forced against their will into the trade. The story is bought to Millennium by a young tyro researcher and his girlfriend, and Mikael and co decide it merits their full attention.

Upon her return Lizbeth once again visits Bjurman for a brief reminder on the terms of their agreement, as she believes he has been remiss in adhering to some of the finer points. After the official warning Bjurman decides enuff is enuff and places an order with a local naughty man for one serve of murder.

All good so far? Well things change shortly after when a chain of events turns everything upside down. When Mikael visits the gung-ho researcher Dag and his girlfriend and finds them recently deceased he realises that there are those who don’t want the woman trafficking scrutinised. 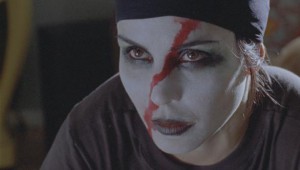 The last lead from Dag to Mikael was the ringleader of the trafficking ring called Zala, meanwhile as is her habit Lizbeth hacks into Mikael’s computer to look into proceedings for herself. On and on they both continue to investigate separately using their own means, Mikael boldly visiting the suspicious to find what he can with direct questioning, and Lizbeth following up leads of her own – in full menacing face paint and armed with a nasty taser.

Since the first film Lizbeth is now slightly more effeminate, or at least her hair is 5% longer and more feminine. She is still mistrusting of almost all around her, casually uses people to get what she wants, and still seems at least one step ahead of everyone else, the police, Bjurman, even Mikael. She also kicks much ass, and being 5 ft tall and 45 kg MAX her opponents are always much bigger than she is.

Ultimately both Mikael and Lizbeth establish that there is one big blonde guy that seems to be impeding their progress, and I mean Big and blonde. Again through their own independent research and investigation – they don’t meet in this film for more than a few minutes screentime, Lizbeth and Mikael make some breakthroughs regarding Zala, the big blonde guy, and exactly who is pulling his strings. Along the way Mikael finds out even more about Lizbeth’s troubled past as we realise just how intricate everything is, and how the key characters all seem linked together somehow.

I like these films, they are no-nonsense and smart, and don’t rely on big explosions, witty banter or inane plot devices. In a way they remind me a lot of the Bourne films of the last decade, not necessarily amazing but taut and effective action with a good plot driving the story forward as the key protagonist busts the case open.

Lizbeth is a great character and I fail to see how Hollywood will find a suitable English language replacement with Barbie-ing her up some way… we’ll see.

The Girl who played with Fire is definitely a little more far fetched than the first film, not so much in the actions or events, but just how everyone in it seems to be linked together so closely, but at the close of the film I knew indisputably that three things were true:

1/ I would happily watch many more films with Lizbeth in the driver’s seat.

2/ There is still room for smart drama with a little action to spice things up: and the very fact that this needs highlighting shows just how few good films there are in this space and:

3/ Lizbeth Salander is smart as paint… and tough as fuck.

Final Rating – 7.5 / 10. Ladies and Gentlemen, you’ve met the Bourne Identity, meet the Swedish equivalent – I give you the Bjorn Identity!