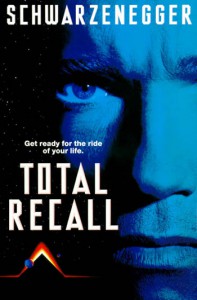 Get ready for your close up.

Total Recall might not be the most realistic film ever made, it hasn’t got the attention to detail and the gritty realism that a James Cameron film boasts, in fact it actually seems more cartoony than Avatar – which I shouldn’t need to remind you was about 9 ft tall blue aliens – but at its heart it is all about providing a good time to the audience by whatever means.

It was the first R rated movie I ever got to see in the cinema even though I had to sneak in to see it (I was 16 or 17 when it was released) and sat through it alone. To this day the only time I have been to the cinema by myself. Perhaps it was the realisation that I was at least pretending to be a big boy now, but the whole 2 hour process was amazing and has left indelible imagery in my head to this day. The credits and opening music sends chills down my spine, and some of the special effects and futuristic touches thought up are now almost reality.

But is Total Recall Great? Certainly Not.

However 20 years on from release it remains Great fun.

Quaid (Arnie Schwarzenegger) has nightmares. Nightmares about Mars. But Quaid has never been to Mars.

“C’mon you can’t all be asleep. Get up and PLAY WITH ME!”

So when he finds out that his entire memory is fake it is fair to say he is a little pissed. Pissed enough to kill dozens of people in a bone-cracking, neck-snapping rampage that takes him directly to the Red Planet.

Exactly why is irrelevant for this review, suffice to say that Mars has bad guys who run the planet, lead by Cohagen, his evil henchman Richter (Michael Ironside) and assorted minions striving to eradicate the perceived good guys who rebel against the tyranny, lead by the mysterious and unseen Kuarto.

Quaid gets involved with all this, though at times who is really siding with is up for debate, see it turns out that before his mind was scrambled Quaid was called Hauser – and to make matters worse he was the go-to guy for nasty old Cohagen, the guy who runs Mars with a clenched fist.

There’s a big twisted back story that tries to explain what is going on and whose side Quaid is on, but the fun here is in the visuals and the action. Say what you want about the director Paul Verhoeven but his films get remembered and talked about…

None of them great (in fact Showgirls and Starship Troopers are trainwrecks), but all still discussed to this day.

“I see you noticed my earrings.”

In the case of Total Recall – the violence is over the top, bones break, steel rods are thrust through victim’s heads and arms are torn from the torso, all often with a suitable quip after the death. The mutated people on Mars look brilliant, especially Kuarto when you finally see him, and I haven’t even gotten to the tri-titty lady yet! 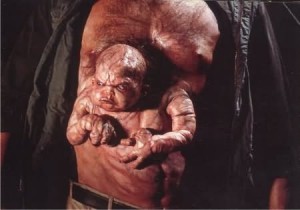 Some people think they’re unique with a 3rd nipple…

The violence is equal opportunity, civilians, cops, soldiers and myriad henchmen are all despatched in a hail of bullets. It is refreshing to see that the filmmakers used old school techniques – largely by necessity – as CGI wasn’t yet seamless or effective enough. This is actually a good thing, nowadays Kuarto would be a pixellated job, probably still cool, but nowhere near the level of cool attained here. Sure at times body doubles are obvious and at one point the walls caving in are obviously some sort of foam, but it just seems better.

Capping off all this is Arnold. I doubt that this film would even still register if it wasn’t for him, he chews and stumbles through his lines as only he can, leading to some classic quotables including:

Now whenever a film asks me to suspend disbelief I am happy to go along… for a while. But too far is too far.

1/ It was already unrealistic for Sharon Stone to marry a construction worker – at least this was explained when it was proven she was a plant. But then we learn her real squeeze is Michael Ironside!

2/ Then there is the scene where Quaid gets into Mars using a large fat-suit complete with a realistic head, only the head has only been programmed to respond to the only query that customs generally ask “How long is your stay?”. So when the follow up question arrives the face and lips distort in panic – but still only manage to squeeze out the same reply “Two Weeks”, that is until the head is removed and thrown to a soldier where it says clearly “get ready for a surprise”. So the verbal problem was a major issue until it came time to deliver a snappy one liner?

Aside from this howler there are numerous minor continuity issues, convenient plot twists and some major events that seem so unbelievable that they actually wrote dialogue to try to cover them up for the audience. At one point Cohagen admits it is all amazing that all these random events actually resulted in his plan working at all. Translation: We know it is tough to swallow, just enjoy the movie alright! 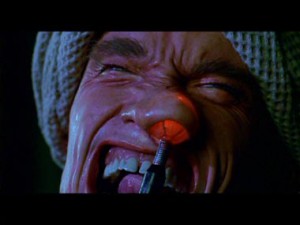 Quaid decided to send the nosehair trimmer back for a refund.

Total Recall moves at a frenetic pace, everyone with a speaking part is either killed or kills in the film, there is no room for stragglers or loafers here. There is so much over the top violence that the audience shouldn’t be disgusted as there could be no way any of this is real – I for one get more disgusted watching the news, and the actual things real people do every day.

Total Recall was never meant to be rocket science, nor is Schwarzenegger a rocket scientist. It is a hectic action film with some inspired set design, a hyperreal environment and kick ass action scenes.

Again, it’s not great, but it is great fun.

Final Rating – 8 / 10. An awesome example of a sci-fi action film, Arnold in his element.

While I try to throw a joke or two into proceedings when I can all of the opinions presented in my reviews are genuine. I don't expect that all will agree with my thoughts at all times nor would it be any fun if you did, so don't be shy in telling me where you think I went wrong... and hopefully if you think I got it right for once. Don't be shy, half the fun is in the conversation after the movie.
View all posts by OGR →
This entry was posted in Arnie Schwarzenegger, Film, Movie Reviews, OGR Recommends, Worthwhile Movies. Bookmark the permalink.