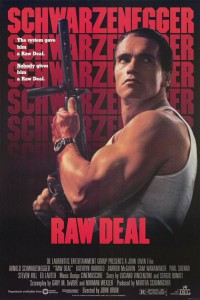 Raw Deal is realistically a vehicle to let Arnold Schwarzenegger plug bad guys with bullets, all the while spouting ridiculously macho dialogue. So rather than talk about it I’ll try to summarise it DVD cover blurb style.

“Arnold Schwarzenegger is Mark Kaminsky, a happily married small town sheriff wrongly tossed from the FBI for caring too much.

When criminals take the life of someone close to him, Kaminsky has no choice but to renounce the very laws he swore to uphold, and infiltrate the gang and solve the case… (long pause)… by any means necessary.

Once inside Kaminsky takes the alias Joey P Brenner, and must deal with the constant threat of both criminal lowlifes and the possibility that he might one day be forced to point a gun at a police officer to save his own life!

Join Arnold Schwarzenegger as he must avenge the death of a friend by singlehandedly demolishing a criminal organization as only he knows how.

The one-liners are snappy, the stunts are hot, and the women are even hotter.

Back to reality, Raw Deal is a good old fashioned “one guy is able to shoot dozens of heavily armed bad guys with hardly a scratch” film that they don’t make enough of today. It is totally mindless violence, no scene really stands out as being either original or even very memorable, but it remains an entertaining 90 minutes.

Much of the enjoyment actually comes from hearing Arnold butcher his carefully scripted and supposedly off the cuff lines, and chortling when he says things like “Do you think I still pass the physical” because, y’know, Arnold’s a pretty fit and buff guy.

Raw Deal is an ideal way to kill a couple of hours on the weekend without concentrating or caring too much in a non-threatening inoffensive way. The bad guys die, the good guys live, and Arnold gets to chew a cigar and have his first “getting ready for battle” montage, something he later did approximately 46 times in subsequent films.

Final Rating – 7 / 10. An early Arnie flick, not as OTT as Commando, nor as big budget as what followed, but an effective implausible action flick.

While I try to throw a joke or two into proceedings when I can all of the opinions presented in my reviews are genuine. I don't expect that all will agree with my thoughts at all times nor would it be any fun if you did, so don't be shy in telling me where you think I went wrong... and hopefully if you think I got it right for once. Don't be shy, half the fun is in the conversation after the movie.
View all posts by OGR →
This entry was posted in Arnie Schwarzenegger, Film, Movie Reviews, OGR Recommends, Worthwhile Movies. Bookmark the permalink.