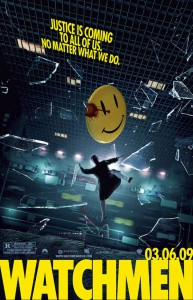 “You are getting very sleeeepy.” (For three plus hours!)

I never read the Watchmen comics.

Until about 18 months ago never even knew they existed.

Not going to read them now either (or pretend I have read them).

I loved what Zack Snyder did with the Dawn of the Dead remake, it was faster, uncompromising and didn’t settle for mediocrity.

I looked forward to 300 but was ultimately disappointed. It was gorgeous to look at but fell in love with slo-mo, flash and style over substance.

The opening credits go for many minutes, I mention this mainly as the movie over three hours long and at times draaaaags. The credits show an alternate version of the 80s with the Watchmen and their background integrated, they are pretty clever and if you pay attention help a little with what follows.

The only active Watchmen (Watchman?) is Rorschach, the rest were forced out by President (in this reality) Nixon. Rorschach believes that the Comedian was targeted for death, and that the other Watchmen are all next, he goes to tell the rest of the group.

Over the next 30 minutes we meet some of the ex-Watchmen, find out that their roles were passed on by others and originated when police decided to go undercover to deal with certain criminals that hid their identities to avoid justice. Some Watchmen are keeping a low profile and their secret identities secret and others are out in the open.

We also find that there is a pending nuclear crisis as the USA and Russia are still not pals, and we learn that looking at our watch will become a common event until the credits roll.

One hour and 7 minutes in (yes I looked) we get our first cool scene. Nightowl and Silk Spectre, well their alter-egos anyway, are set on by a gang of thugs in the type of alley that only exists in comic books and movies, and they systematically kick the snot out of all the bad guys in pretty violent fashion.

Then after we have the cool scene, back to the rest of the movie. Watchmen goes like this…

Now in saying that the backstories are partially interesting and actually include most of the violence and disturbing events and imagery. And I mean disturbing, there are child murderers, rape and a pregnant woman is murdered onscreen. None of this advances the main plot though which is why it is so annoying.

The plot for the actual events in the film sucks.

Let me point something out, in the entire film not one superhero apart from one, uses their special power to achieve anything out of the ordinary. Read that again, no Spidey-sense, no Hulk-Smash, no Bat-cape, not even any Speedy Gonzales-hotfeet.

I’ll leave my main gripe until the end of this review, but the above paragraph runs a very, very close second. When you have a poster/DVD cover with a bunch of superheroes, and 80% of the film has them doing anything but superheroing, it feels a lot like false advertising…

And dull as fuck.

– a scene on Mars which is 20 of the dullest and unnecessary minutes in modern cinema (can anyone tell me if it was put in to keep the comic book fans happy? I can see no other reason why it wasn’t culled.) It also holds the “twist” that was obvious 90 minutes earlier and isn’t shocking or interesting in any case.
– a fanboy sex scene. What else would you call it when the impotent Geek serves the hot chick after donning his superhero outfit and saving some innocents from peril, and of course afterwards he is debonair and cool.?
– A jail break fight with much hair flying and choreographed slo mo “action”.
– A supercomputer holding the secret plot that is hacked into with 4 password tries.
– A finale set in Antarctica that is as interesting and exciting as the first 1 hour and 6 minutes.

This film would have been better served had it been edited down to a 100 minutes, even 2 hours. As it stands it would be more accurately named Dull and Duller. There is even an in-joke where a superhero says “I’m not a comic-book villain!” Cue 100 nerds chuckling “Yes you are” under their breath.

I have deliberately ignored outlining the various superheroes as they are largely the same, people who punch bad guys, the only difference being their name and outfit. I saw this in the cinema and went away disappointed, and it was only when TOG asked why I wasn’t a big fan that I thought it through and realised that a superhero movie is often only as good as the superhero in it.

So I put together a list of the Watchmen and gave them all a rating out of 10 based upon two factors, intrigue and interest. Anything less than a 6 and I wouldn’t bother watching a film if they were the only superhero in it, as you’ll see they are a faceless and boring bunch. 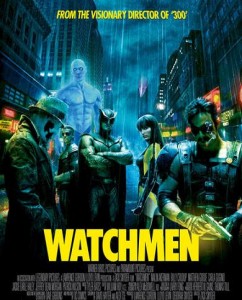 Ladies and Gentlemen, The Village People.

Going by the poster above  I will go right to left to prove my point.

Dead. So it would need to be a prequel.
The comedian is a total wanker, he abuses his power and position, shoots pregnant women, has no allegiance or loyalty and is friendless. He never uses a special power in the film.
This makes him unlikeable but at least interesting, though probably more as the outright bad guy.

Interest – 7.5. A better bad guy than good guy, this guy is as dark a hero as they come.

Her superhero power seems to be fitting into a tight suit, and at least she does that well.
She still keeps in contact with her Mum, the original Silk Spectre who sports really lousy age makeup and drinks heavily, (I think because of the lousy makeup job.) She never uses a special power in the film.
Aside from that she’s… ummmm… Doctor Manhattan’s missus at the start of the film?

Interest – 4.5. I didn’t watch this movie when it was called Elektra, I wouldn’t watch it if it were Silk Spectre.

His superhero power is that he can see in the dark if he uses those night vision goggles (Wow) that are equally available to bad guys too, and he has a ship that looks like a pair of goggles. He never uses the goggles during the film.
A list of his various attributes would include the following: Bland. Desperate. Needy. Impotent.

Interest – 4. Re-read the list of attributes. Would you watch that movie?

Speaks in a whiny monotone, can be anywhere in height between 6 and 50 feet and have several of him running around at the one time, almost omnipotent (not impotent like Night Owl!).
Can teleport himself and others and capable of interplanetary travel. Totally neutral and unfeeling of human emotion.
Used by US as a weapon, singlehandedly wins Vietnam conflict.
Allegedly cancerous, usually nude and 100% logical.
Does use certain powers in the movie. Wa-hey!
Strangely considering the above laundry list of good stuff I could care less about the Doc. He wanders in and out of the film and whines his way through a variety of scenes (including the awful Mars sequence) without impacting the film in any way.

A genius, apparently. We’re at least told repeatedly that he is even though there is precious little evidence.
Rich, cold and calculated.
Publicity and image conscious, the only Watchmen aside from the unhideable Dr Manhattan to go public as a superhero, in any case he doesn’t even wear the mask that he dons in the poster once during the entire film.

Interest – 4. Maybe as a henchman, but as the big cheese he is simply boring.

There is a reason I went right to left from the poster, to get to the only genuinely interesting character last.
Everyone else is a normal person who masquerade as a superhero, Rorschach is a superhero that hates being seen as a person. He has a better voice than Batman, is a truer anti-hero than the Comedian (who is really only anti) and has no off switch.
Rorschach is idealistic about things but pessimistic about society, more comfortable in character than out, and due to his disturbed past is hardened and brutal.
The only guy in the cast who is compelling and multi-faceted, his only drawback must be the dry scalp he gets from wearing the balaclava mask all day.

Interest – 8.5. Rorschach is involved in 3 of the best 4 scenes in the entire film, and I would watch his story in a second.

So there you have it, an ensemble piece with a largely lousy ensemble, think about it for a second, more doesn’t necessarily mean better.

Would you like to go to see a band of untalented musicians?
Would you prefer to watch a sporting contest with mediocre athletes or highly trained professionals?
Would you go to a high speed car race involving only learner drivers? (I would in a heartbeat, but not for the skilful display.)

Watchmen came with a massive buzz, but mainly because the industry needs something to hype each year, so seldom does the film live up to the hype, (The Dark Knight is a notable example).

This is no The Dark Knight.

Final Rating – 6.0 / 10. A group of boring middling superheroes doing largely nothing doesn’t add up to a great movie. Who would have thought?