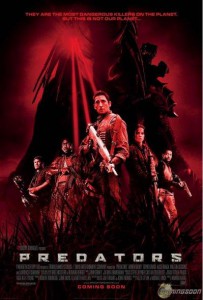 Before I discuss the good points that made Predators an enjoyable couple of hours I must address some gaping holes in logic that I simply could not ignore.

1/ The movie opens with all human characters being dropped into a harsh jungle environment while unconscious. Those that wake up and fumble for a parachute they did not know they had survive, at least initially. Those that don’t go kersplat. Given the purpose of the human cargo this would seem counter-intuitive to the grand plan, if you plan to use something you at least show a little more care initially.

2/ (This happens a lot in films lately.) Attacking creatures can take a number of bullets with only a jolt or a spot of blood indicating they were even hit, except on occasion:

… and they flat-out explode in a tornado of flesh and blood which looks OK on screen but makes no sense. This happens to both creature and human so it is not a result of shoddy DNA.

3/ The entire film utilises a jungle setting, which is cool, after all so did the first. I would argue though that it might take a little more than seeing a couple more moons than normal in the sky to expect a worldwide audience to swallow this “fact”. I mean if you were on the planet fine no probs… But finding a planet with terrain exactly the same as vast areas of Earth, with a breathable atmosphere, drinking water and all the same properties, show me more than a couple of moons please.

But just because these things annoyed me doesn’t mean it is a bad movie, just a reasonable one with plot holes. To enjoy the film more perhaps you can ignore those things above. You can overthink these things to your own detriment I guess, as one guy in the foyer post film said “Yeah but how did they capture all the humans without waking them?”

Yeah, that’s the unbelievable part, not the crabfaced creatures with green blood hunting humans on an alien planet.

All that said I liked Predators, it was harmless fun. It reminded me of the sequels to The Descent and Tremors, nothing really new aside from some tweaks to the cast and creatures, but familiar fun. To explain: Think about a renowned musician. He creates an original album and basks in the credit. A few years later along comes another guy who (with permission) sets out to remake the album.

First questions = Why? Is there a demand and what new stuff are you bringing to the table? Is the older work in need of an update?

Assuming the reboot can be justified, more questions = Should you change what worked and risk alienating fans, or keep it the same and risk being accused of simply ripping off the original? Unless you bring something new to the table even if you remake the thing verbatim what creativity does that show anyway?

The team behind Predators decided it was worth making again, let’s look at their answers to the above questions shall we?

Why? = $, and a potential franchise. It’s easier to use someone else’s ideas than it is coming up with your own.

Demand? As long as there are movies there will always be a market for good movies with memorable bad guys, the Predator creature is a great bad guy.

Update? The original 1987 Predator has no need for an update. It is a brilliantly conceived 80s actioner that served as a great vehicle for Arnie and his biceps, but revisit the answers to Why? Above.

Change or same? 95% is the same, some scenes are eerily similar to the original, even featuring the exact same backing music, and there is no evidence of new stuff even where the new film claims to be different.

Creativity? Nada, zip, zero. A guy with no musical creativity can sing and play Stairway to Heaven – in fact many do – that doesn’t mean they could ever write something as good even in a million years of trying.

So the Predators decided they had enough frequent flyer miles and started bringing their prey to them. Obviously sourced from all over the shop the new “meat” is shipped in seasonally and then systematically hunted down by three-man teams of predator creatures. This particular batch includes a bunch of humans from all over the planet – we have mercenaries, freedom fighters, assassins and cold blooded killers, even a Yakuza. All of them are varying degrees of dangerous, thus providing the predators with a challenge.

After being given a little while to acclimatise the predators set about learning about their new prey by watching them from afar and testing them out with various methods including siccing the many-horned exploding attack dogs on them, setting up the “bird with the broken wing” technique and by trying to divide them up to wipe out the small groups left over.

Adrien Brody is one of the humans, he notices things long before anyone else, the terrain, the tactics, even the weaponry they are up against, perhaps John Edwards should see if he was a predator in a former life? The one thing Brody is not is a friendly team player, he is out for #1 and only seeks or gives assistance when it suits him. There are seven humans to start with, then as you might guess less as the film progresses. (After 5 minutes you have a pretty good idea of who will be around until near the credits.)

After a few brief encounters with the Predators a long-time survivor first-time helper emerges from nowhere to provide some plot development. Somewhat of a hermit, the man tells those left just how he has managed to avoid capture or worse for so long, he even takes them to his hideout and explains that there are two different types of predators, that the two types don’t like each other, and how they operate to most effectively wipe out their targets. Then the Hermit does something so boneheaded and out of character that it makes no sense whatsoever… (I’ll address this after some spoiler warnings at the end of the review.)

Also, as far as the two types of predators, there was zero difference aside from one seemed a bit taller and had longer fangs, hardly a different sub species. You couldn’t have told them apart unless they were standing next to each other. Disappointing. 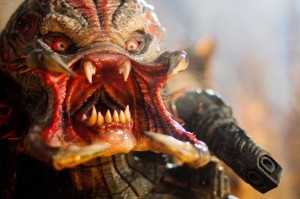 So Brody and his Brody-buddies run around trying various things to avoid detection and death, ultimately deciding on a risky plan to escape. There are multiple scenes and bits straight lifted from the first film, at one point the guy I was there with leaned over and said “Here comes the Billy part”, seconds later he was proved absolutely spot on. (Which makes it especially lucky that a Yakuza guy was able to find an ancient samurai sword shortly before on this barren alien planet!)

I have read elsewhere that this is a very bloody and gory film, I don’t think I am yet that desensitised to violence that I missed all the blood and gore but it wasn’t that bad, I mean exploding dogs and people looks cool but is hardly scary or upsetting. There was really only one bit I remember as being even a little icky and that was exactly the same as the original and even Predator 2 from the 90s. 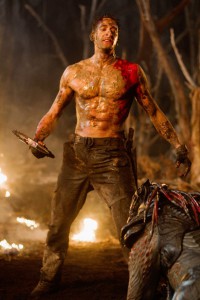 None of the kills are particularly inventive, nothing that the humans or predators try seems especially groundbreaking or memorable, and Brody switches to action hero mode by making his voice a little raspy. Not Batman-raspy, just I have the flu raspy. He did get pretty ripped though for his shirtless scenes, (I need to make a movie just to get rid of my gut). The rest of the humans have not been described aside from generic descriptions as they are merely predator fodder exactly as intended.

The only one worthy of a mention in a hardened death row crim, whose unsavoury comments and desires repeatedly raise the eyebrows.

All in all this was – to answer my own query raised earlier – an unnecessary remake, but worth a shot as it would be far better to look forward to a new “great” predator movie than it is seeing that another Alien Vs Predator shitfest is on the horizon, and even though I like the original a lot it was hardly Die Hard, T2 or Aliens, things that just don’t need to ever be remade.

Final Rating – 7 / 10. This will not change your life, it won’t even change your weekend. But on the night you watch it you might feel a little better than you did before.

Now to discuss the hermit. Need I say “Spoilers ahead”.

The hermit has survived for 10 seasons by avoiding everyone else and keeping to himself.

So in his 10 minutes of screentime he:

Needless to say 10 seasons of great care and staying under the radar being fucked over for a quick chat made no sense. He wasn’t going to eat the others and they had no value to him, so ultimately there could only be a downside by even approaching them. As Dory said he should “just keep swimming” and stay the hell away from them.

Oh and to rub salt into the wound he then got to be one of the exploding guys as well, that’s two logic holes for ya Larry!