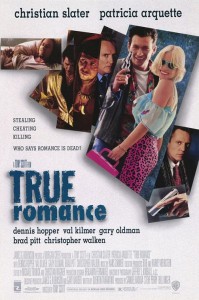 Kilmer gets 4th billing for two scenes with him never been shown onscreen and murmered dialogue?

Guys like Quentin Tarantino and Kevin Smith burst out of the blocks, garnering massive critical acclaim for their originality and fresh approach to both dialogue and film-making in general. The unfortunate reality for both is that as their careers progressed they both fell in love with their own press and reputations, resulting in a loss of perspective and an inability to differentiate between truly entertaining moments; and self indulgent crap.

That’s why I strongly believe that for both of the above mentioned allowing other directors to take a crack at their scripts. Hopefully the fresh eye might be more likely to excise irrelevant and plain silly material, while keeping the core elements intact.

I strongly doubt anyone else might’ve improved on the final versions of Pulp Fiction or Reservoir Dogs, but since then it’s fair to say that Tarantino hasn’t made anything rivaling either in terms of quality or longevity. (I’m not sure what anyone else would’ve made of Dogma, Clerks and Jay and Silent Bob Strike Back to be honest!)

We’ll never know what Tarantino might have done if allowed to proceed with his True Romance script, what I can say is that the guy who ended up with it did an extremely good job. Not quite great mind you, but about as good as I think this was destined to be. 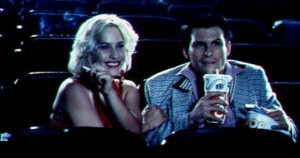 The tale of young lovers Clarence and Alabama Worley starts with them finding each other in Detroit, shows how they come into a large cache of drugs when Clarence decides to ‘emancipate’ his (now ex-)hooker wife from her menacing and dangerous pimp, and follows them as they flee cross country to LA to work out how best to turn the illicit stash into travellin’ cash with which to finance their new lives.

But True Romance is more than a rote tale of young lurrrve, it is essentially a series of memorable moments placed amid a sea of references to the obscure and unusual, references that Tarantino has since turned into a career obsession. The resulting Tony Scott helmed film contains Elvis, Kung Fu movies, wannabe-black white boys, comic books, B-movie references and of course long tracts of intricately crafted dialogue.

As we saw in Pulp and Dogs, these speeches delivered from the lips of quality actors in between well directed passages of action often result in simply legendary output. Samuel L Jackson, Christopher Walken, Harvey Kietel and Steve Buscemi have the capacity to elevate. In lesser hands… er lips… not so good, (David Carradine, practically everyone in Death Proof – even Kurt Russell couldn’t ‘cool up’ his banal speeches).

True Romance manages a few classic moments and has introduced some legendary bit characters. In the moments category the stand off between evil mob boss Christopher Walken and humble everyman – and Clarence’s Dad – Dennis Hopper is one for the ages. 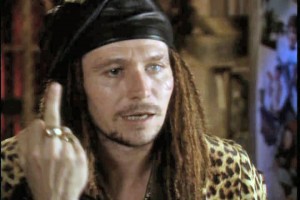 Say it with me: ‘breastessess’.

Gary Oldman squeezes every ounce out of his drug dealing pimp Drexl, and Bronson Pinchot gets many laughs in one of his less cartoony film roles as out of his depth PA to a big time Hollywood producer Elliot Blitzer.

(Brad Pitt and Samuel L Jackson have less meaty roles but do what they can to remain in the memory banks.)

The only misstep in my view is the inclusion of Val Kilmer as Elvis Presley, who appears only to Clarence as sort of his guiding angel – apparently this is a sign of Clarence’s mental state but this is never really explained and comes off as a little too much – even in a film such as this.

Aside from the King, True Romance works because it gets the mix right between violence, laughs and even music. Christian Slater and Patricia Arquette are both perfectly capable in the central roles as Clarence and Alabama while the rest of the cast try to steal scenes from them. Clarence is cocksure and confident, and Alabama is equally arresting and sassy – with Arquette’s bouncing jubblies deserving acting credits of their own.

It might have turned out better in Tarantino’s hands, but I’m more than happy with what the underrated Tony Scott managed to conjure up. Given his track record of turning potential mediocrity into entertaining flicks such as The Last Boy Scout, Deja Vu and last year’s Unstoppable I think he deserves as much credit for the end result as Tarantino does for coming up with the script in the first place.

Final Rating – 8 / 10. One or two moments from greatness. True Romance is certainly violent, profane and at times plain ridiculous. It is also fun, creative and extremely memorable.