For better or for worse, 1994 saw the release of Clerks and the genesis of Kevin Smith’s career as a writer and director of renown. 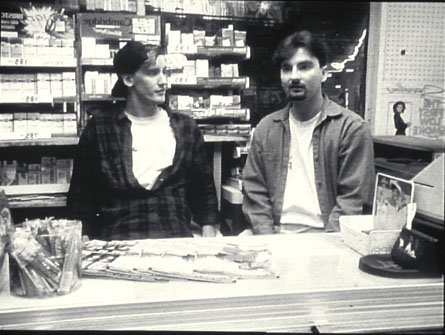 Call it the film that launched a thousand fart jokes, but regardless of what has come since the original Clerks is still a notable and worthwhile film for many reasons.

Today I will discuss both the original and the always ill-fated but inevitable sequel. 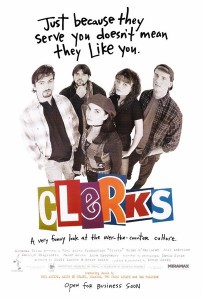 If you like the first 10 minutes of Clerks then you’ll probably like the film, because it neatly encapsulates the elements that propel the storyline; sarcastic yet often intelligent dialogue, human idiosyncrasies and constant potty talk, all delivered by minimum wage, minimum commitment counter staff.

Dante and Randall staff adjoining convenience store and video shops respectively, neither is especially proficient at their roles, but while Randall is resigned to a life of average-ness and no responsibility, Dante dreams of more. He at least attempts to remain professional and responsible – even when there is much evidence contrary to this.

The story takes place over one day, and is less a story than a bunch of shit that happens while two twenty-something slackers are at work. Dante is constantly reminding himself and others that he wasn’t rostered to work that day, and with Randall it is hard to tell, as he never seems to be manning the counter and only sees customers as it suits him.

Through the day they each encounter a seemingly endless stream of bizarre situations filled with inexplicably erudite and verbose one note characters and just plain wierdos, and rather than gaze goggle-eyed in bewilderment Dante and Randall often merely shrug and move on as if this happens every day.

Now I have worked in service industries for over 2 decades now and have accumulated a few stories that seem almost impossible to believe – but they’re true – you had to be there… (how many times have you heard that one?) In the case of Dante and Randall at the Quick Stop they have 8 or 10 such obscure and unlikely situations all in the one day, some featuring some painfully blatant set-ups which in the film’s defense you might not notice on first viewing.

Clerks was truly low budget and filmed on real locations. It has no name actors, which might explain why Kevin Smith likes to painfully cram as many ‘movie-star’ cameos into his films now, kinda like a nod to who he can get now. (And look what he did when he got Bruce Willis!)

Above all the puerile jokes, smutty dialogue and clumsy set ups Clerks is funny, really funny. A lot of that is to do with the fact that the two leads are actually very likable even when taking down another gormless customer or casually swearing up a storm in front of a toddler, but ultimately there is enough real humour in the film to see it as more than just a juvenile excuse to film your friends swearing and to plonk yourself next to a twitchy long haired stoner as he babbled away incoherently…

Final Rating – 7.5 / 10. Clerks was, and is, truly funny stuff. It proved that Kevin Smith had a way with dialogue and some skill as a director, something he managed to turn into a career. A career which so far has seen him write thousands more body fluid and bizarre sexual act jokes – but now he gets to film them in glorious colour and get big name actors to talk smutty. 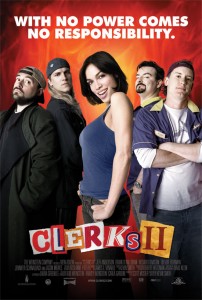 “Hey why is she in the middle? Oh yeah, our ugliness…”

Speaking of evolving, Clerks 2 was released over a decade after the original, over which time Kevin Smith directed and released several films of varying quality.

Clerks 2 finds our ‘heroes’ Dante and Randall still working a counter, only because of the unfortunate demise of the Quick Stop they are stationed at the local Moobies fast food chain. Moobies is a fictional Maccas wannabe with a happy cow as its figurehead, this gives an excuse for some amusingly titled menu items, items with names so hilarious I can’t really remember them now only a couple days later.

The usual rules apply, Dante is still well-meaning yet allows himself to be influenced by Randall, who a decade on hasn’t changed one microbe. The remaining staff are a religious and polite young nerd named Elias, who is constantly appalled by Randall’s profanity, and Becky (Rosario Dawson), the store manager who just wants everything to run smoothly.

Now ten years on Dante has finally found a woman that he has deemed marriageable, and he and his new missus are leaving New Jersey to go to start their new married life in Miami. Randall seems to resent that his long time buddy is leaving, even if it is for the best for Dante, and Becky seems to be sad also at losing a friend. Dante himself seems confused and torn.

Now that the platform has been laid down, Kevin Smith steadily betrays any though of a serious or even coherent plot with his usual indulgent stream of smut – and now that he is famous and has pull – celebrity cameos! Wanda Sykes, Jason Lee, Ben Affleck and of course the ubiquitous Jay and Silent Bob all get their moments.

The movie suffers as it tries to one up the original (and frankly everything Smith has done since) with more. I’ll kinda defend an indefensible dance number half way through the film as it had a great Jackson 5 song, some inspiring jiggling from Ms Dawson, and was basically fun if totally out of place, but the bestiality sequence that ends the film was desperately try hard and basically lacking any semblance of comedy.

Aside from that there was a Lord of the Rings diatribe by Randall that was as funny as it was accurate – and I am a huge LOTR trilogy fan – and the film ended reasonably well, hopefully putting a full stop to the adventures of Dante and Randall.

Final Rating – 6.5 / 10. It was nice to see the minimum wage duo back at it again, but it takes more than a couple of speeches and a nice end montage to recapture the moments of effortless magic in the original.

In Summary: All the way to Cop Out I defended Smith in my mind against all the critical slams, but the signs were bad even before then: the self-deprecating humour that immediately turned savage when anyone dared to agree, the soapbox preaching against anyone that suggested he had lost his touch.

I finally lost patience when he blatantly used the media to announce that he was no longer to use the media. I will give Red State a try – with low expectations – but already resigned to the fact that he has indeed already lost the hunger and edge that brought him fame some nearly two decades ago.