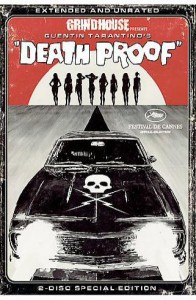 Stuntman Mike, turn around or you won’t kill any of them!

Quentin Tarantino has made many films over the last 20 years or so, since Pulp Fiction was released none of them could be defined as “little” or “under-publicised”. QT himself is the master of self-promotion, even though he does little more than name check his influences and other films and filmmakers he admires, he knows that in most cases people watching his interviews will less likely look for the films he discusses, and more likely stump up the $20 to check out the film whose poster he is sitting in front of instead.

So far on this site I’ve looked at Kill Bill and Inglourious Basterds, both films I felt were underrated, but at least Kill Bill was entertaining despite the mishmash of ideas and “influences” that it tried to cram into 100 minutes. I will get to the undisputed highlight of the QT CV in Pulp Fiction in a while, so perhaps now it might be time to look at his weakest effort in Death Proof.

QT himself described Death Proof as a serial killer film, only with a car used as the weapon of choice. This was the first time that this wrinkle was used in film, and watching this film will surely tell you why it should be the last.

All of the techniques and devices that Tarantino used in his best films are here, only now they seem so contrived and irrelevant that they are merely gimmicks. There are lengthy dialogue scenes with multiple characters that go on and on with supposedly unique and inventive elements being inserted into the conversations, only they go absolutely nowhere. This shouldn’t be a problem, after all in Pulp Fiction exactly what did the conversation about the difference between French Burger King and Maccas add to proceedings? Nothin’, that’s what, but at least following that there was a scene where something did happen, these mini-convos within a convo simply provided amusement and light entertainment between the set pieces, in Pulp Fiction it was brilliant…

In Death Proof these little nothing-convos are highlighted because they are proceeded by nothing – and also followed by nothing. When “something” finally happens it is boring and derivative anyway, there are a couple of car crash stunts in the film that last less than a minute even with the various replays, hardly worth handing over 2 hours of my life for really.

Like other Serial Killer movies 80% of the film is spent following the prey, again like other genre pieces the prey is female, young and generally well-groomed (read tidy). The females in Death Proof are hardly the vacuous “let’s compare boobs” blonde clothes-horses with tits that are cast in millions of shitty horror movies (Prom Night / Sorority Row / et al), they have jobs for a start and can deliver a line without fluttering their eyelashes, but again this doesn’t really make them very interesting or entertaining, there is a lengthy dialogue scene (actually the first hour is one long lengthy dialogue scene) where a DJ Jungle Julia has set up her friend so that she must perform an impromptu lapdance for any guy that utters a lengthy piece of prose to her. The premise is dumb, the concept very far fetched and aside from 30 odd seconds of lapdance the entire scene is simply lacking suspense and interest – and that is the only thing that happens in the first hour or so notable enough to highlight, you can imagine the other 55 minutes.

Kurt Russell is perfectly capable as the baddie Stuntman Mike, he is always interesting but not really that menacing that you worry about the fate of his victims, that could also have something to do with them, I guess you worry more about the fate of someone who provides you with some entertainment or laughs first.

Stuntman Mike’s role only demands that he look like a vaguely pitiable late 40 something dude with a story to tell, and he manages to do that but not much more, I felt bad for him in the lapdance setup yawning his way through a long and pointless speech to set up something so lame, and whether it was his choice or QT’s the decision to try to beef up his role by having him say corny lines or deliver cringeworthy lines in a stupid over the top way was hugely misdirected. 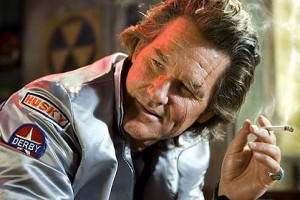 Who could possibly remember seeing THIS guy at a bar?

By the time the second group of victims come in I had already lost all interest, there is a conversation held which was supposed to have “black-dialogue” that made me nearly lose my lunch it was so pathetic and lamentable.

Also, if in QT’s opinion Zoe Bell is an awesome stuntperson worthy of great praise, she is a god-awful actress worthy of only scorn. When she was on the hood of the speeding car being tossed around like a hip-hop video extra at the post party all I could think of was how stupid it was to nearly kill a bad actress for such a shitty movie.

This movie was part of the Grindhouse collaboration with Robert Rodriguez, his contribution being the awesome Planet Terror. All Grindhouse ended up proving is that Rodriguez can make most things entertaining, and that when Tarantino gets lazy and plumps for hooks and quirks over substance all his flaws quickly come to the surface. The film could have lost 40 of the first 60 minutes easily with no confusion and definitely no loss, as watching people eat, drink and talk boring shit can be done anywhere without shelling out for admission. Overall Death Proof had no memorable dialogue, no jokes, no “cool points” and all the plot points seemed contrived and well – lazy.

As a supposed homage to old-school drive-in style B Movies it is also surprisingly clean and clear unlike Planet Terror. Apparently a few early grainy bits, old cinema ads and stutters are enough to establish that, but in my eyes it is the lack of logic in what follows that places Death Proof squarely in the B Movie class, only I doubt that was Mr Tarantino’s intention. After all how could the police miss the fact that a seedy middle aged guy was talking at length with a group of young women in a menacing fashion on the night they were killed. A man that proclaimed to one and all what a great driver he was and that HE WAS STUNTMAN MIKE! No-one thought to look into this tidbit of information? After all only 4 young women died… Sorry 5, the fifth killed in Mike’s own car; a black hotted up muscle car with a skull and crossbones on the bonnet no less – I guess no-one asked about her or remembered such a minor plot-point.

I tell you what if I lived in a small town and 5 of the hotter young chicks were all killed over a single night I’d sure as hell want some answers, and some tissues.

Sorry QT, I was happily along for the ride for a while, Reservoir Dogs, Pulp Fiction, even Jackie Brown was quite good. Kill Bill 1 & 2 showed promise but the worrying signs were on display, and with this and Inglourious Basterds I am officially worried, I’ll keep watching your stuff but it might be time to prove that you haven’t grown lazy and now simply rely on obscure references and rip-offs excuse me homages of other films and the casting of out-of-favour actors.

Final Rating – 5 / 10. If you have a 113 minute film and 90 minutes are spent spouting inane dialogue that goes nowhere I would call that a dodgy ratio. The film itself is a bigger car-wreck than any that actually appear on screen.

By the way, there are 5 close-ups of shoeless feet in this film.