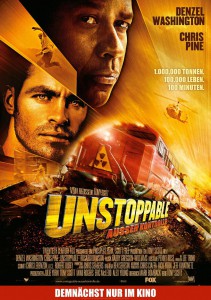 Unstoppable is everything a movie of this type should be. It helps of course that everything that could possibly go wrong does and that the characters making every boneheaded decision seem to be conspiring together to cause a disaster.

It also helps that Mr Reliable Denzel Washington is in the driver’s seat – literally – and director Tony Scott is driving the film. The pair have a unique ability to make the mediocre eminently watchable, Man on Fire and Deja Vu being the prime examples.

But I forgot we’re supposed to be learning!

Back to our two trains: the 777, a red driverless, half a mile long runaway train laden with dangerous chemicals that could explode and wipe out an entire town running at speeds of up to 70 mph. And the blue 1206, piloted by 28 year vet Frank Burns (Washington) and Will (Chris Pine) a rook on his first day at the helm – his first error on the job being that he allowed too many carriages and the 12906 won’t fit into most sidings as a result.

Rosario Dawson is the well meaning and hard working stationmaster (she is no Fat Controller) who must negotiate with the nasty Railway Corporation who only see implications involving costs, share price damage and bad press. Kevin Corrigan is a Federal Safety Inspector who just happened to show up on the day – and who seems to know every possibility, implication and outcome before he is even asked. Ethan Suplee and TJ Miller are railway workers whose ignorance and dopiness may or may not have helped contribute to the situation in the first place.

I must finally point out Lew Temple as Ned – the guy every company needs. Ned is a railway lifer, he takes his job extremely seriously, cares perhaps too much about things no-one else cares about and obviously firmly believes the show would fall down if he weren’t around… and in this case he might just be right. In a small role he perhaps steals the film as the highly strung self important hippy-ish Ned.

I guarantee you Ned has his own railway set up at home that spans two large tables and has an intricate web of tracks, all within regulation of course… and Ned fully runs shit.

Final Rating – 7.5 / 10. Not sure what else to say, it is a film about a runaway train. Probably as good as such a film can be, and definitely better than it needed to be with the subject matter.

While I try to throw a joke or two into proceedings when I can all of the opinions presented in my reviews are genuine. I don't expect that all will agree with my thoughts at all times nor would it be any fun if you did, so don't be shy in telling me where you think I went wrong... and hopefully if you think I got it right for once. Don't be shy, half the fun is in the conversation after the movie.
View all posts by OGR →
This entry was posted in Denzel, Film, Movie Reviews, OGR Recommends, Worthwhile Movies. Bookmark the permalink.