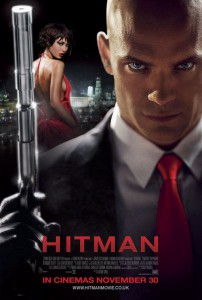 Before I make the seemingly obligatory video game adaptation put down (Rotten Tomatoes gave Hitman a quite unfavourable and slightly unfair 14% rating) can I say that Hitman isn’t that bad. It isn’t that good, but this is no Street Fighter or even a Resident Evil sequel.

Hitman is a game in which a big bald, barcoded badman walks around killing people, then trying to get away unscathed. Simple really. The simplicity of the concept means that the filmmakers have a great deal of wiggle room without fear of reprisals from die-hard gamers. The fact that it is based upon a violent video game also means the main viewing demographic is young men, that also means that violence, action and T&A should be included – and Hitman certainly provides a smattering of all those elements.

Timothy Olyphant is the titular Man, trained from his youth to be a master in the assassin arts and an exponent of many killin’ disciplines and methods. He wears a black suit, a white shirt and a bright red tie at all times on the job. He moves quick and packs light, eschewing all relationships and human contact. Hitman is cool, calm and clinical, he works and sleeps alone.

Now as in the game he is bald and has a distinctive barcode on the back of his head – for what reason I can’t fathom, maybe his trainers ran him through a scanner nightly before stacking he and his fellow trainees away? – in any case with a distinguishing mark that like on my bonce I just might grow some hair to cover it… or wear a hat?

The action starts when a job supposedly goes wrong and Hitman misses his target despite clearing watching his intended mark’s brains fly through the air after his bullet explodes through his forehead.

After this botch job Interpol are immediately on his tail, with the Russian FSB (think KGB) alongside. With multi-national enforcement on his tail and still more bald, bar-coded dudes in the area looming menacingly.

Hitman – he is never really named – makes the only decision that seems logical to him, complete the job.

A young innocent hooker named Nika (Olga Kurylenko) – yet another actress who is far too hot to be a real hooker – is inadvertently caught up in proceedings. Finding her feminine wiles of no benefit she finds herself relegated to ride-along status, giving Hitman someone to talk to and taking every available opportunity to get her kit off (which is a few times boys!)

While Hitman works his way to the truth using any means necessary and effortlessly blending in with his luminous bald tattooed skull, while the law and his fellow assassins closing in on the trail the film is OK. Nothing jumps out as being particularly memorable or amazing but the story moves along well and there are a couple of clever moments and decent action, nothing suggesting laziness or a cash-in on the filmmaker’s part anyway.

The only scene that totally sucked occurs about half way, when a four assassin / 8 pistol Mexican standoff on a train is abruptly cancelled in favour of a four assassin / 8 mini-swords duel. It was a pathetic, inexplicable and shitty scene and I can see how that might have lead for more than a few critics to drag out the red pen for the remainder. But 90% of Hitman is reasonable at worst, Olyphant is effective as the steely-eyed and determined Hitman – with an extra 10kg of muscle he could be a good Jason Statham-like action guy – and just when things start to drag ‘oop, there goes Nika taking off her shirt again’.

It’s yet another example of a film without much to recommend, but at the same time you’ll be no worse off for seeing it, and you might even find yourself enjoying it at times.

Final Rating – 6.5 / 10. I’ll stop short of saying Hitman is one of the best video-game adaptations – it isn’t good enough for that – but it separates itself from the bulk of the terrible ones by adhering to tone and trying hard to be entertaining.