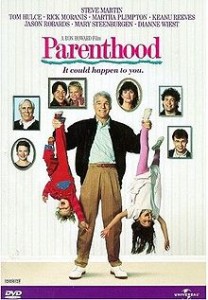 No Steve, you hold them by the ears!

Parenthood follows the everyday trials and tribulations of up to 5 generations of the Buckman family, the centrepiece of which is Gil (Steve Martin) – in the film at least.

Gil wants to be a better Dad than his own father (Jason Robards), than the well meaning but domineering Nathan (Rick Moranis), the negligent and unreliable Larry (Tom Hulce) and the non-existent former spouse of his sister Helen (Dianne Wiest) who has run out on his two teenage children. But Gil and wife Karen (Mary Steenburgen), as every couple, have their own problems with career demands, family issues and 3 young kids with their own idiosyncrasies and developmental problems.

As you might guess the cast is quite stellar and probably wouldn’t be possible in this day and age of inflated salaries and egos, Parenthood isn’t so much an ‘event film’ as one which shows the various generations dealing with raising kids of various ages in their own ways.

Some of the occurrences and developments in the film are quite serious in tone but obviously dealt with in amusing fashion. While teenage angst, sex and domineering parents might seem like easy targets for comedy they also manage to squeeze a chuckle or two from broken and breaking relationships and neglectful parents.

The entire cast does well at providing carefully rendered characters, Steve Martin as always provides the deadpan laughs, the exception being the immortal kid’s birthday party scene where he is allowed to run wild and crazy as Cowboy Gil the most amusing party entertainment on film.

Hulce is unlikable as the fast talking deadbeat Larry – which is the point, and Weist is very good as the downtrodden and almost desperate single Mum Helen trying to juggle 2 growing kids and a moronic live in boyfriend/husband to her daughter played by Keanu Reeves, who at the time was still embracing his doofus image.

It’s hard to talk about Parenthood in more detail, the humour is created through the low key realistic situations and how those going through them deal with them. Aside from the Cowboy Gil scene there aren’t too many laugh out loud moments but there are numerous chuckles to be had and the film quite accurately proves what Robards’ character says near the end; ‘once you start you never stop being a parent’.

Final Rating – 7.5 / 10. Memorable and worthwhile, if not classic. Parenthood has dated quite well in 20 plus years and remains as relevant and amusing today.