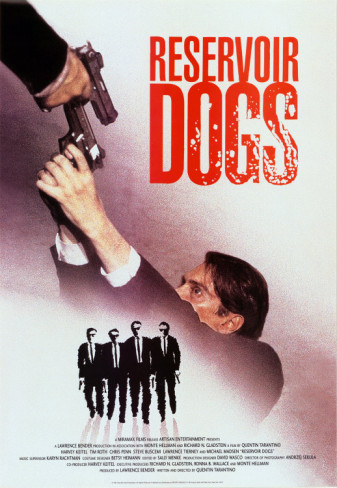 And he was right. But it wasn’t good for him.

It was at this point – shortly after Jackie Brown by my reckoning – that QT ceased simply reading his own press and started writing it.

Since then Tarantino does more press for his own films in the years before they come out than any other director, always gushing about other B movies, exploitation ‘classics’ and obscure foreign films, before effortlessly segueing back to ‘and that’s the thing with my new film, I’m bringing back South Korean carwash slashers from the 70s, only I’m using the backdrop of chimpanzee trainers in love’.

It suddenly became less about how good the film was and more about the sources of inspiration and which ‘now’ actor was in it alongside the inevitable face that QT dragged in from the past.

This is all well and good – unless you want me to start on about Death Proof and how Inglourious Basterds is an over-rated piece of crap – but Reservoir Dogs was fucking good before people could pronounce Tarantino, and compared to his more recent output it only looks better. 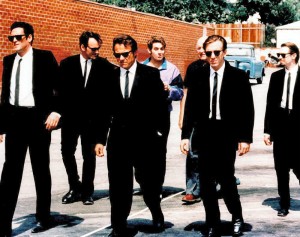 All the Mr colours of the M&M bowl.

Mr Brown. Mr White. Mr Orange. Mr Blue. Mr Blonde. Mr Pink. Six guys in black suits, white shirts and black ties. They have breakfast with grizzled old guy Joe and track suit wearing Eddie, holding rambling conversations talking about a variety of subjects in dialogue peppered with obscenities and refreshingly non-script sounding lines. They exit the diner and head on down the street side by side, chuckling all the way.

They are heading to rob a jewelers. A robbery that goes horribly wrong, leaving innocent bystanders, criminals and police alike scattered dead in the streets.

The bulk of the film deals with the aftermath of the robbery.

I will leave the names aside, needless to say that the cover shows Tim Roth, Harvey Keitel, Steve Buscemi and Michael Madsen as headliners, they all play key roles. There are long intense scenes with heated dialogue while the survivors discuss the possibility of being set up, which is eminently possible given that none of the gents with ‘colourful’ names know each other, having all been teamed up for this one off job.

This also means that none of the men spare any niceties or pull any punches in casting about their allegations and accusations, leading to fist fights and inevitably the drawing of handguns – we’re in the US after all.

The camera work at the time was fresh and new – even if most of it was allegedly stolen from Asian filmmakers like John Woo – and the back and forth editing was a little disconcerting at first but undoubtedly exciting, far from the overdone device that it has since become, even by Mr Tarantino himself. (There is even a flashback within a flashback!) 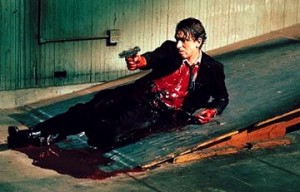 “And THIS is for ruining my good workshirt!”

The acting is excellent, Roth, Buscemi and Madsen made instant names for themselves and Keitel did nothing to sully his all time great reputation, the minor roles were all well cast and equally well acted, which in a film light on for car chases and shootouts is quite important. Again it must be mentioned that this was before Tarantino started such indulgent shit like ‘The 4th film by Quentin Tarantino’, so everything is lean, mean and efficient, honed to a fine edge.

The low budget nature of the film is rendered irrelevant by the plot which lends itself well to only a few sets and backdrops, and when the dialogue is as crackling as that on display here the lack of car chases and large explosions is hardly missed.

I think it is fair – and obvious – of me to say that I think QT has more than just rested on his laurels since his early hungry days, but credit where credit is due, others have made Tarantino-esque stuff in the last 15 years, including QT himself, but no-one has managed to top Reservoir Dogs and Pulp Fiction yet, and it’s fine with me if they never do.

Final Rating – 9 / 10. The older it gets the better it is. Reservoir Dogs is like an old song now, you know practically every line and there are no surprises, but when it is on the TV / radio you can’t change the station.