It took a hell of a lot longer than I initially anticipated but here we are at the end of the Jackie Chan movie marathon. It hasn’t all been plain sailing, I had obviously brainwashed myself into remembering Rob B Hood, The Medallion and The Tuxedo as not totally shocking, and I hadn’t expected The Spy Next Door to be quite so deplorable. But in the last month or so Wheels on Meals, Dragons Forever and this film especially made it all worthwhile again.

Now that the glory days are over we can say with certainty that this will forever be seen as Jackie’s finest moment. A quick remembrance: I moved to the city 15 years ago and within a month or two had moved into a flat with a mate from my school days. He was a good bloke but not particularly known for being “edgy” with his music and film tastes.

So one evening his arrives home and proclaims to one and all (which was me) that we were going to see a double feature that week at one of the independent cinemas in town… That double feature? How about Hard Boiled and Drunken Master 2. To this day I have not had a more eye opening cinematic experience. The crown was filled with uni students and try hard alterna-types, but after Hard Boiled ended we all thought that the evening was already worthwhile and that the Jackie Chan film would just be the icing on a good night.

Little did we know that Drunken Master 2 was both icing, cake, streamers and balloons! After the applause ended (always thought clapping an inanimate screen was dumb but whatever) you would have been forgiven for forgetting the name of the first screened film, let alone the details… and Hard Boiled is a classic!

All I know is that Tony Jaa is the only man alive currently making movies with the physical tools to even dream about taking on a DM2 type epic, but from what I have witnessed in his first few films he has no clue about how to go about making it with anywhere near the same flair and creativity.

Jackie plays Wong Fei Hung, but I will refer to him as Jackie in this review, it’s just easier (and lazier).

I don’t think they give an era but I’m guessing it is the early 1900s? Jackie, his father Master Wong and a household lackey are on a train heading home from a trip to buy supplies for Master Wong’s medical practise.

Jackie tries to pull a fast one to save on paying tax and hides his Father’s purchase in the luggage of a dignitary who is exempt from tax. Once safe he goes to pick up the item and finds that a thief is setting off with it. This justifies the first of 4 all-time classic fights that this film boasts.

The first part of the fight takes place beneath the train and involves a sword and spear being waved about clinically millimetres from the intended targets in a confined space as they dodge and weave, always at the last possible instant. After a brief let up Jackie follows his target to a barn when the fight is recommenced. Jackie begins to use his drunken boxing, a style basically made up that is both unpredictable and heavily reliant on the proponent’s physical abilities as some of the poses and moves require incredible athleticism. Fortunately at this time Jackie was in his late 30s and due to his supreme conditioning his physical ability was very near its peak.

The attack-ee is dubious as to the effectiveness of drunken boxing, stating that it is too slow and not nearly powerful enough to defeat skilled enemies, unfortunately the convo and fight are cut short by the departure of Jackie’s train.

Once aboard the train Jackie realises that somehow there was an inadvertent switcheroo, and his package contains not his Dad’s ginseng, but a jade imperial seal. More on why that is important later.

Home now, Jackie says G’Day to his Mum (who in reality was only 5 or 6 years older than Jackie himself) and sets about working on replacing the lost ginseng root. Jackie, Mum and Lackey all try to come up with a suitable alternative without Master Wong twigging. Master Wong is a noble, honourable man, and it is quite obvious that he would not stand for any funny business, especially when it will cause him to lose face.

Meanwhile: Corrupt white (British) guys, the previous holders of the jade seal, want it back. Now. They also run a dodgy steel factory where the workers are abused, threatened and overworked, and they also happen to reside near Master Wong’s dojo, which they want to buy for no other reason than the noise is apparently annoying to them… All these three things are addressed during the film and are sorted by the end.

The middle segment of the film highlights Jackie’s abilities and shows how Master Wong is against him ever utilising them, as to speak the obvious fighting can result in someone getting hurt. Drunken boxing in particular is frowned upon due to the impact heavy drinking has on the brain (insert Lindsay Lohan joke here).

When the aforementioned bad guys steal Jackie’s Mum’s purse thinking it contains the jade seal, Jackie is impelled to fight them to regain the purse and defend the honour of the dojo. When Mum notices a crowd and tells him to use drunken boxing as a promo for the dojo, Jackie consents…

Cue All-time classic fight No. 2 in a series of 4. 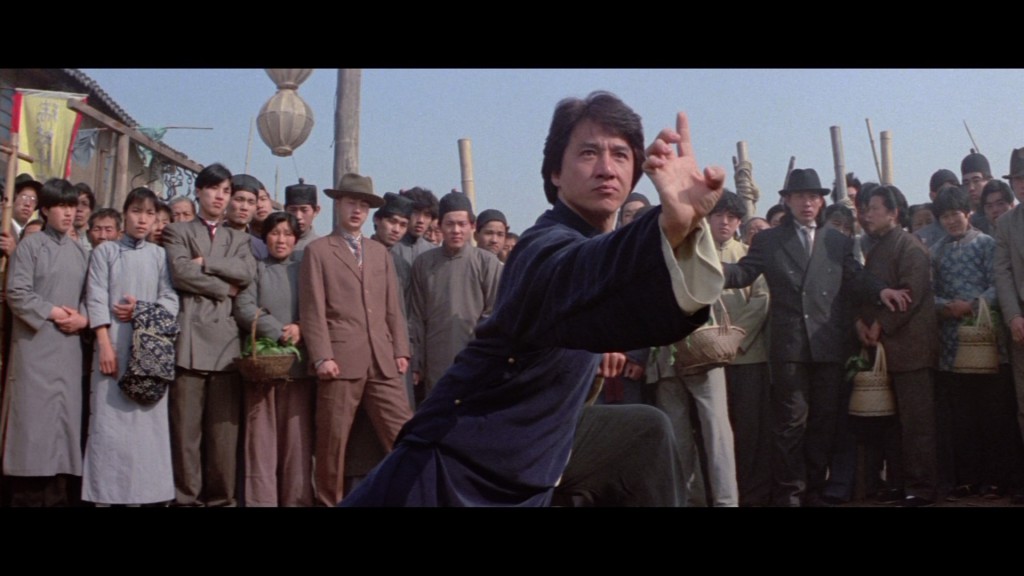 Jackie takes on 5 guys at once (insert Paris Hilton joke here), drinking all the while (ditto) and sets them all on their backs while showing amazing flexibility and skills learned through repetition (phew Paris now your ears AND your hoo-ha must be burning!).

After his success Jackie is to put it mildly, maggotted drunk. Master Wong is far from impressed despite the victory and sets about disciplining Jackie due to the one-two combo of drinking and fighting. After things heat up Jackie is turfed from home, where he goes about continuing the drinking part into the night.

Now too intoxicated to even realise what is happening, Jackie is once again set upon by the bad guys but has no capacity to fight back. Rather than being killed though or even savagely beaten Jackie is stripped nude and hung from a post to shame his Father and bring the dojo into disrepute. The next morning, humbled, Jackie vows to never drink again. How’d that work out for Mel Gibson?

Out of the blue the “thief” from the first sequence comes a-knocking. It turns out that he is actually an army hero trying to steal the jade seal to keep it out of the hands of those who would take China’s heritage and national treasures away. He is actually a good guy! Which sets up a pleasant cuppa at the local tea-house… which culminates in all-time classic fight number 3: Jackie and army-hero artefact preserving guy Vs the Ax-Gang! 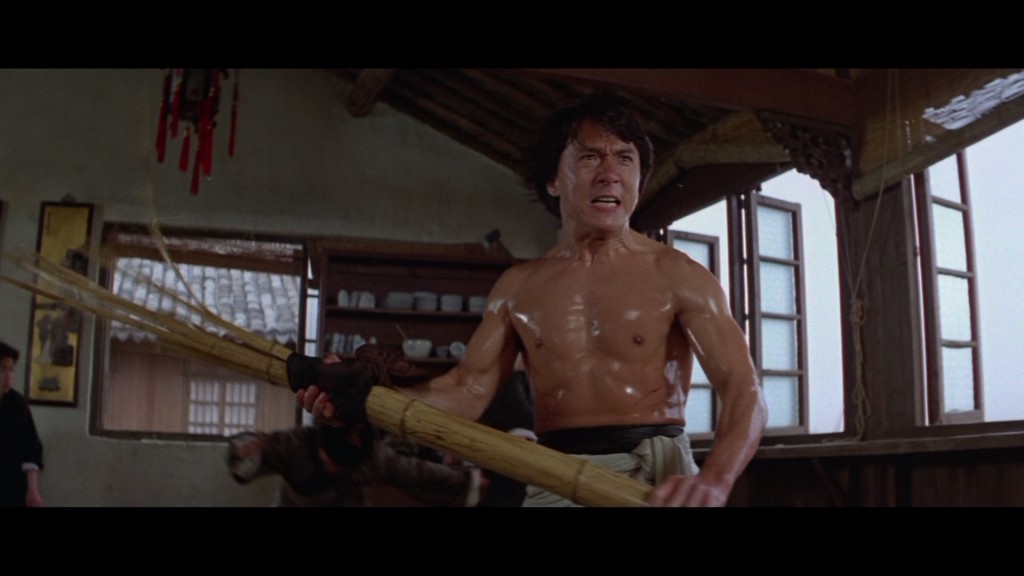 “How dare you spoil my tea party!”

The Ax-Gang are a bunch of guys with Axes. Pretty straightforward really. They are hired to solve problems and put the hurt on those that are in the way, kinda like the A Team but with less photoshop and CGI.

The fight between the two heroes and 40 odd assailants takes place on two floors, and is basically nothing less than epic. Hemmed in on the upper floor Jackie sets about keeping multiple opponents at bay with his fists, feet and a length of shredded bamboo while army-guy tries to stem the inflows of guys through the windows and up the stairs. There are less stunts than in other stoushes but there are never less than 5 or 6 guys always attacking onscreen at one time, with scads more moving in… it is like a live action version of Left 4 Dead once the zombie horde is aware of the living.

And we know what Jackie thinks about relic smuggling!

The final fight is 15 minutes of amazing cinema and gasp inducing incredibleness, I made a word up in its honour. It should be studied in primary school every year from now until the end of never.

It is fucking awesome.

Dressed all in white Jackie rolls up at the gates of the steel mill. Flanked by his buddies Jackie does not life a finger as they break through the armed soldiers defending the perimeter to enable Jackie access. It is very reminiscent of Michael Jordan in his prime, he’d look at his teammates in the huddle and more or less say “just get me in there, I’ll do the rest.”

I like the Jordan – Jackie comparison. Each has numerous flavour of the month imitators and wannabes. Jordan had Harold Minor, Vince Carter etc, Jackie has Tony Jaa and a bunch of guys on various weekly DVD covers gathering dust. Jordan’s only real competition came from Kobe Bryant, Jackie’s Jet Li, but in the end for both there can be only one of each, and Kobe and Jet will have to be satisfied with just being included in the discussion.

The first “level-boss” is a big muscly white guy with a length of chain that he waves around and occasionally heats up in the burning coals just to give a little extra ting to proceedings. Jackie uses him literally as a warm-up and drops him in a few minutes. Normally this is the length of time that the final fight in a martial arts movie might get  but not today Zurg!

Jackie then takes on 4 various minions whilst simultaneously getting “sniped” from above by the Big Boss and his 2IC to slow him down and allow the minions some cheap shots. I mentioned before that Jackie is wearing his Sunday finest whites so this only serves to piss him off. 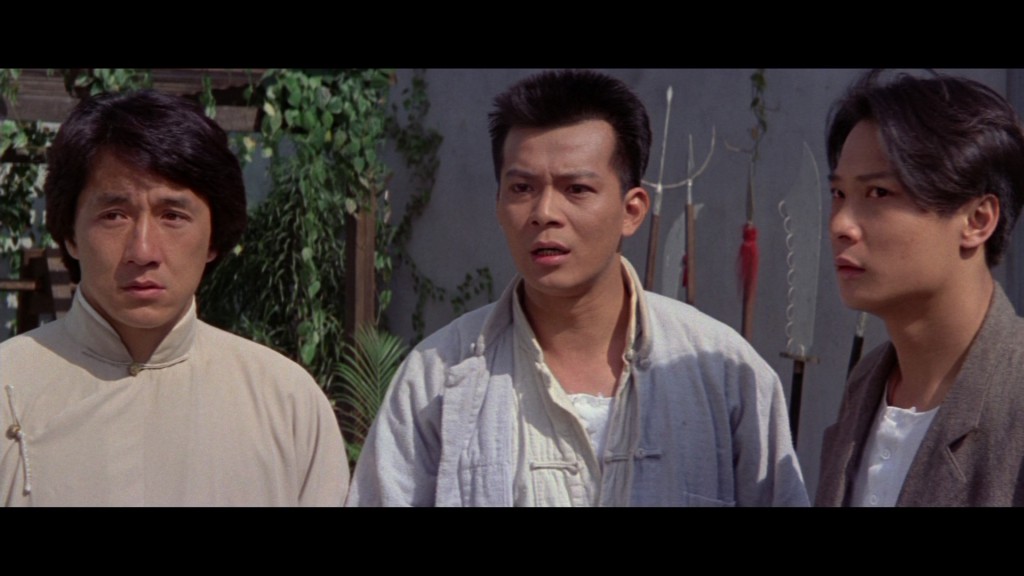 Best shot I could find on the web of the white outfit. Damned internet.

The final-Final-FINAL fight sees Jackie taking on the 2IC (for a few minutes) and the Big Boss played by Jackie’s actual bodyguard at the time Ken Lo, who has the quickest and longest legs in the business it seems. After some early setbacks and the famous trip through the burning coals (which Jackie did twice as he thought the first one wasn’t convincing enough!) Jackie drinks some industrial alcohol for Dutch Courage and in short sets about pounding piss out of both guys in a frenzied and largely wild attack with no regard for his own safety.

There is the obligatory Star Wars Episode IV awards ceremony where Master Wong is honoured but for all intents and purposes the finest Martial Arts film of all time just ended.

And on this occasion the most enjoyable couple of months (bar some recent crap) in intermittent film watching has come to an end.

Final Rating – 10 / 10. If there was a better than perfect score this might get it. Some quality comedy builds into the best martial arts film ever.

While I try to throw a joke or two into proceedings when I can all of the opinions presented in my reviews are genuine. I don't expect that all will agree with my thoughts at all times nor would it be any fun if you did, so don't be shy in telling me where you think I went wrong... and hopefully if you think I got it right for once. Don't be shy, half the fun is in the conversation after the movie.
View all posts by OGR →
This entry was posted in Film, Great Movies, Jackie Chan, Movie Reviews, OGR Recommends, Superstars, Worthwhile Movies. Bookmark the permalink.