Pirates of the Caribbean: On Stranger Tides (Review) 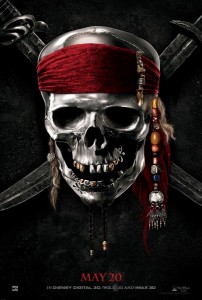 Well at least it wasn’t Yo-Ho-Hum and a bottle of sleeping pills, but in the drive home from the theatre I realised they spent more time coming up with the title than they spent prepping anything else to do with the film.

As I watched the blur of colourful characters from varied backgrounds whirl and strut across lavish sets and exquisite locations I couldn’t help but think I’d seen it all before… but had long since forgotten. A fate that will no doubt be consigned upon any recollections of Pirates of the Caribbean: On Stranger Tides within days.

First let’s take a step back by disclosing everything I know about the Pirates franchise already:
–    Johnny Depp is a scurrilous PG13 pirate named Jack Sparrow, without him the Pirates of the Caribbean franchise is sunk.
–    The original movie is named after a theme park ride.
–    Don’t ask me about the second or third films, I have seen them and can’t remember a thing about either.

That’s about it really, I know sweet Jack … squat about the films, which doesn’t seem to impact any enjoyment derived from this one. In reality each film is about providing just enough distraction to have the audience walking out of the theatre thinking ‘well that must have been entertaining’, and recalling one of the many distractions – pirates, ghosts, mermaids, Johnny Depp, cleavage –  in a favourable enough light that they line up for the next inevitable sequel.

In this outing we are caught up to speed quickly. Sparrow is as always in custody, though the type of custody where he can casually escape whenever he wants. He has lost his beloved ship the Black Pearl, presumed sunk, most of his crew, and 90% of the co-stars from previous films. The one constant is Captain Barbossa, the nefarious ying to Sparrow’s debaucherous yang, though he is now siding with the British navy, how very un-pirate-y indeed.

After the initial catch-up chat between Barbossa and Sparrow, which rapidly devolves into a slur-off of indecipherable accents and roguish bravado, there is the inevitable escape sequence and getaway chase. 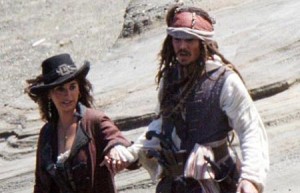 “Remind me again how much we get paid for this…”

The now free Sparrow hears of another claiming to be he, and he is none too pleased at this pirate piracy, that is until he is astonished to learn that it is none other than Angelica (Penelope Cruz) an ex-flame of his – one who he may have even actually… liked, and the two spend the remainder of the film smouldering at each other as they move from one carefully constructed setpiece to the next.

A map has emerged that apparently leads directly to an important site, but it seems every man and his parrot have the co-ordinates already with the British navy – lead by Captain Barbossa, the Spanish navy – lead by a handsome guy who looks like a cross from the Cat from Red Dwarf and Prince circa 1985 and still another vessel making a beeline toward it – lead by none other than the greatly feared Blackbeard (Ian McShane), a man whom even the lowest, most dangerous pirates dread.

Blackbeard’s ship possesses magical powers that are stronger the closer he is to the ship and his crew are zombified strongmen, apparently more loyal and focused than regular scumbags. Angelica managed to secure a place aboard for both herself and Sparrow by claiming to be Blackbeard’s long lost daughter…

The ‘treasure hunt’ in this film is the Fountain of Youth – something Depp and Cruz might actually need if they plan to sail this cash-seacow for much longer.

The remainder of the film has the various parties moving towards their goals in a very PG13 manner, with fight scenes at sub-Jackie Chan levels, and of course the primary characters running into each other repeatedly to exchange suitably pirate-y dialogue.

If you believe the film every ship is full of empty barrels lying about to be thrown around, jumped on or jumped off as they roll away cinematically, every room has many ladders that go straight up to the rafters for no reason, and every rope when cut has no impact but allowing the cutter to ascend rapidly, they never seem to be tied or supporting anything. 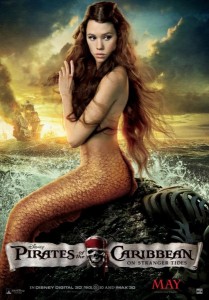 The much discussed mermaid scene serves no purpose but to allow the filmmakers to discuss it much more, insinuating how tough it must have been to have all those supermodels lying about with no clothes on again and again, even when the finished onscreen product CGIs away all the goodies…

And the finale takes place on a set which might have been left over from The Goonies.

I was amused by Pirates 4, mostly because I let the bright colours and expensive elaborate sets seduce me, lest I become enraged at just how calculated and empty this all is.

Final Rating – 5.5 / 10. Pirates 4 might not be a total shipwreck, but it doesn’t really float my boat either.