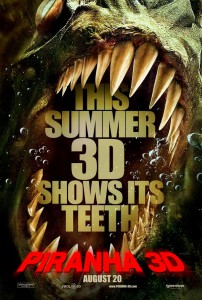 This may be the first film review where the review is longer than the script that was to make it, in fact I think it took me longer to write this than it did to make the first 2/3 of the film, and don’t worry this will be brief.

Someone mentioned over a mouthful of sandwich one day “Alexandre how cool would it be if ancient fish came back and attacked Spring Break kids…?” and Mr Aje said “Stop right there! I’LL NEED 16M, WE START WEDNESDAY!”

The plot is this: Ancient fish come back and attack a bunch of kids at Spring Break.

There are thousands of vacuous party-idiots at Lake Victoria. 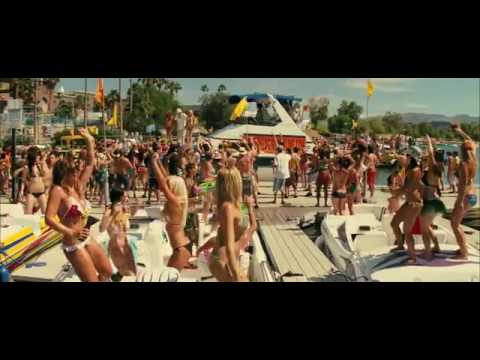 Among the boneheads is sleazy T&A filmmaker Derek (Jerry O’Connell), his cameraman and a couple of immaculately disproportioned young chickies to point the camera at.

A wide eyed young local boy of about 17 named Jake dodges babysitting after being conscripted for location finding duties (they then film the ladies underwater rendering the locations pointless I would have thought). Must’ve been a big choice for a 17 year old – “Sitting”. “Titties”. “Sitting”. “Titties.” “Oh who am I kidding?” His female fancy Kelly also hitches a ride to provide a damsel who will somehow attract a certain level of distress.

The babysittees are both about 8 and just independant enough to get themselves into trouble, and to cap it all off the local law enforcement seems to consist of Ving Rhames and Jake and the two kids mum (Elizabeth Shue gunnin’ for that second Oscar).

When seismic activity opens a fissure into a water-system, unleashing a species of long since thought extinct vicious cannibal piranhas anxious to try new taste experiences the plot goes out the window. Feeding time.

There are many boobie shots in the film but the film slows down enough to feature a couple of assets more prominently – and to be fair there is pretty good reason.

There are hundreds of kills but the film slows enough to feature a few of the more graphic, and with many deaths comes much gore, some computer generated and some good old fashioned effects: guy’s body through the floor kinda stuff.

I didn’t love Piranha 3D and it didn’t bring much new to the table, but it knew exactly what it wanted to be and was very efficient in that.

You don’t have to do much research to find out that there is a lot of flesh on display, both the good kind and the gore kind, this is where Piranha 3D excels, the only improvement might’ve been trying to put a couple more jokes into proceedings.

Piranha 3D ends up in the company of films like Dog Soldiers, Black Sheep and Zombieland, but two or three more decent rib-ticklers might have pushed this a little closer to classics like The Descent, Tremors and Slither.

Final Rating – 7.5 / 10. Piranha 3D is a fun horror film. Boob-induced hypnosis will keep the young blokes squirming in their seats until the bloodbath starts… and then it’s the dates turn to squirm.