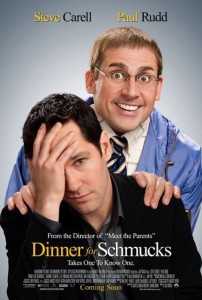 Well this is embarrassing, never thought I’d have to write this.

An open apology letter to the film Date Night.

Long time loather, first time apologiser. A few months ago here I reviewed your cinematic entry and pretty much panned it.

In my review I said such things as:

I gave the film a 5.5 and considered it an unwelcome low point in the career of one Mr S. Carell, one that smacked of laziness and lacking INSPIRATION.

Well last night I watched Dinner for Schmucks, and while I don’t take anything back, I will acknowledge that sometimes lazy and formulaic trumps tepid and pathetic.

The plot of Dinner for Schmucks revolves around Tim (Paul Rudd) and his attempts to schmooze his way into a promotion (and new BIG office) by attending “secret men’s business” event where participants aim to outdo each other by bringing along the most outlandishly pathetic guests possible with the aim of ridiculing these none the wiser unfortunates. One squiz at the poster will tell you exactly who Tim brings and the tone of what follows.

Tim is unsure of what he wants to do until he accidentally hits Barry (Steve Carrell) in his car. After the accident and some misunderstanding (where they have a long 5 minute convo in the middle of street traffic and no-one honks) Tim decides this is a sign.

Barry is not the 40 Year Old Virgin Mark II, he is obnoxious, loud and unthinking, even if his intentions are sometimes good. Basically he is an idiot, someone that you might describe as “a nice guy”, but a guy that nonetheless you would never choose to hang around with.

I have said previously that these type of films demand that the leads have an obvious and original quirk, something that sets them apart from all others. Barry’s is that he makes intricate dioramas, painstakingly by hand, featuring mice, real dead mice dressed in miniature clothes, (some actually look pretty cool). He terms these works “Mouse-terpieces”.

Already by this point I was muttering to my wife that this was going nowhere, and she was even more blunt.

Tim’s missus Julie discovers what is planned and is against it, Tim’s secretary also knows and is all for it as it means a promotion for her too. I know also and am firmly against it. Who greenlit this rubbish, the basic premise is just lousy and practically demands a lazy outlandish character-driven finale.

Barry seems well meaning but constantly put his foot into his mouth, dropping Tim into awkward situations, then further exacerbating the issues with his attempts at bailing him out. The old cliché of someone badmouthing another character while they stand open mouthed behind them is used not once, not twice, not even thrice! Four times is monumentally lazy to the point of insulting the audience.

At one point Tim exclaims “Look this is a huge misunderstanding”, at last I agree with something. The characters have 796 chances to put a stop to all the shenannigans, they just inexplicably choose not to, falling ever further into a spiral of ridiculousness.

The usual slap-dash “comedy” technique of an amazing series of convenient inconveniences is used way too much, every character overreacts or takes the wrong option at every turn for “comedy’s” sake (though the end result is never funny), and the cartoonish characters are both impossibly unrealistic and all too possibly awful. The embarrassing thing is that there are three one note joke characters introduced before the dinner even starts, and I exclude Barry from this! 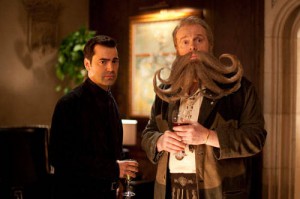 Once the actual titular event begins the film further devolves into something that can only be described as Schneider-esque. Definitely not a good thing.

So Date Night, to sum up while it is unfortunate that over the 90 odd minute journey from first credit to last I found proceedings too routine and formulaic, I now realise things could have been a lot worse. Now with Dinner for Schmucks I walk away longing for something routine or formulaic, as what I just witnessed was so lacking, so devoid of effort, so plain INSULTING, that I somehow blame myself for watching it.

Let me once and for all say “I’m Sorry”, I still didn’t like Date Night as a film and will be happy if I live another 50 years and never see you again, but in your defence you are at least no Dinner for Schmucks.

Final Rating – 4.5 / 10. The fact that I actually like the two leads makes this even harder and unexpected. Dinner for Schmucks EASILY slides into the worst 10 wide release films that I have reviewed in 18 months.

Post Script: I deliberately left all reference of Jemaine Clement out of this review, he is in it and he is actually reasonable. More than anything he deserves more than being associated with this shit.