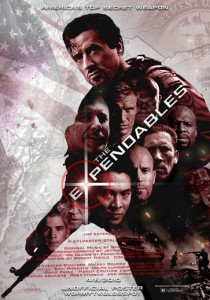 Most of these guys couldn’t even say “expendables”.

Welcome to #613 in a series of films where Sly Stallone puts holes in people who speak English with a crazy accent.

The Expendables features a large number of tough guys with bicep measurements bigger than their IQs and has a higher body count than syllable count.

The good guys are always quicker on the draw, never miss, don’t bleed and are ever-ready with a dopey quip, there are lots of BIG explosions, hundreds of faceless baddies die and no-one runs  out of bullets.

There’s even a damsel in a tower in need of saving. The best kind too, the one with big tits.

It is safe, predictable, formulaic, and just like your old scuffed slippers very comforting. This is the equivalent of Sex & The City 17 or yet another lousy rom-com with Jennifer Aniston and her latest rumoured baby-daddy. You know exactly what you’re gonna get going in, so you’re either happy in advance, or on a date and dreading the inevitable 90 minutes of “hilarious” misunderstandings.

And to think in the last 10 years there has been a dearth of real straightforward “action” films, where they haven’t tried to be too clever or they attempt more widespread appeal by either toning down the violence for a more kid-friendly rating or add a comedy or romantic element for the ladies.

Well folks the ladies ain’t coming to see The Expendables, and we have Sly Stallone to thank for that.

First up the title has precious little to do with anything in the film, it is the name of the group of mercenaries lead by Stallone. You’ve seen the poster above so we know a bunch of big guys are in this, the team captains are Sly and Eric Roberts (I’m as surprised as you.). When they decided on this game of pick up they had the following guys to choose from:

If someone flexes half the guys will be pushed off the poster.

This was never going to be Shakespeare. Forget the Expendables, half the team should have been called the Murtaughs, because they are definitely too old for this shit.

Couture, Austin and Lundgren can’t act, and Jet Li tries but he is about as intelligible as Sly. At least English is his second language, Sly doesn’t seem to have a first. But in a movie like this every guy could just say “Uggghhhh” a lot – and some do – and it would be just as good.

A sample of the dialogue that I could actually understand:

Keep in mind that was a torture scene; witty, funny stuff!

The Expendables are the good guys, Sly has been progressively getting a tattoo across his back with the team’s name, I’m guessing after the first year he started pondering shorter names, or altering it to Depends and seeking sponsorship opportunities for his age group.

The Expendables are mercenaries hired to take down a deadly island fortress that is used to protect a thriving drug trade. An early recon mission shows that the bad guys are suitably nasty and deserving of the many bad things that will happen to them later, and identifies a good white guy to have as the main adversary, the thought process being that foreigners are menacing enough to shoot in large numbers, but they probably can’t be important enough to be the main enemy: like M&Ms, by the handful they’re great with their various colours, but just one? Hardly.

The problem with so many characters that demand the spotlight is similar to a concert by the Black Crowes that I went to a few years ago, there were so many talented musicians worthy of recognition, which lead to solo after solo by each of them. After the 5th 12 minute solo-filled song I simply got bored. That isn’t so bad here as many guys means a lot of action, but it does mean some of the leads are marginalised or only get a short span to exhibit their talents, Jet Li for one could have sat this one out and nobody would have noticed, he is one guy that is better than the material.

To acknowledge what everyone already knows Sly shares a 3 or 4 minute action-free scene with fellow 80s legends Bruce Willis and Arnold Schwarzenegger. The scene is notable for nothing aside from the guys onscreen and could quite easily have been cut without anyone noticing, though it was odd that Willis spat out 6 or so F bombs in about as many lines.It’s fair to say that there are many reasons for Sly’s longevity in this business, CGI, botox and ‘roids alone added 10 years to his career. But aside from those handy helpers above all Sly knows what guys want to see onscreen, bullets, explosions and blood.

Comparing apples with apples though in Action terms Sly has few true competitors this year, A Team was watered down and Predators was the only true action film this year so far, and even that was only a quasi-sequel to an 80s flick.

But guys aren’t very smart, we’ll pay money to go to strip clubs to see what the internet provides for free. With $9 warm beer and terrible music hardly a deterrent. Grown men go to watch professional wrestlers acting in sweaty loud plays and scream along passionately. In both cases we know what we will see, it will be exactly the same as last time. We go anyway. We pay for The A Team and Predators hoping to see nothing more than a straightforward action flick and get disappointed when the filmmakers try to class things up or get too clever for themselves..

Sly knows this, he knows these guys have a few bucks even after slipping their second to last $20 in a jaded girl’s g-string. The Expendables is exactly the same as 25 other films I paid money to go and see through the 90s.

I and millions of other 15 – 45 year old guys would happily pay 4 or 5 times a year to watch the same film again. For some reason Hollywood has forgotten about this, at last count The Expendables churned through 40M in earnings in 10 days, the more expensive (and it must be said better) Scott Pilgrim has made only a quarter of that. Pilgrim was obviously a labour of love, every second carefully crafted, Sly got a bunch of beefy mates together and shot some brown people. Speaking in value for money terms I would think the winner was obvious to all but the critics.

For all my bagging of idiots like Jessica Simpson and Mariah Carey they are nonetheless millionaires and adored by legions of people with low IQs and questionable judgment. There is nothing too clever about The Expendables, it is bereft of intelligence, humour and logic.

But by simply recognising that the dumbing down process is the drawcard perhaps Stallone is the smart one after all.

Final Rating – 7 / 10. Unlike Jackie Chan Stallone never relied on his athleticism, bullets don’t get old and slow down.

While I try to throw a joke or two into proceedings when I can all of the opinions presented in my reviews are genuine. I don't expect that all will agree with my thoughts at all times nor would it be any fun if you did, so don't be shy in telling me where you think I went wrong... and hopefully if you think I got it right for once. Don't be shy, half the fun is in the conversation after the movie.
View all posts by OGR →
This entry was posted in Film, Jason Statham, Movie Reviews, Sly Stallone, Superstars, Worthwhile Movies. Bookmark the permalink.