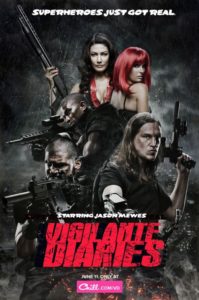 Ok here’s how dumb this film is; the title is ‘The Vigilante Diaries’, and the film is broken down into chapters that the filmmakers helpfully label as ‘journal entries’.

The Vigilante is a guy.

Think Kick-Ass, then think Super, then think Watchmen, then skoll an entire bottle of scotch and bash your forehead against a wall. Whatever you’re capable of retaining, that’s the Vigilante.

Despite that the Vigilante is well liked by all bad criminals, because he kills them and their friends. But he isn’t a lone wolf, more a pack leader, as various DIY superheroes – all with awkward AKA’s – congregate around him, jabbering inanely while Vigilante preens and primps himself on the tallest rock.

When crime gangs of various nationalities threaten… something… probably national security or cute puppies or something in between, our group of muscleheads must don their Gears of War style outfits and prepare a series of God-awful quips, so as to lay waste to the bad guys.

Think of the worst bits of Taken 2 and 3, then the team bonding sequences in Suicide Squad, before recalling how pathetic Smoking Aces was… actually The Vigilante Diaries fits right in with all of these, only with a couple moments that Pulp Fiction should sue for, and a randomly cute Asian chick every 20 minutes or so.

Oh, and Jason Mews is here, which I could have opened the review with to save you having to read 400 words to find out this film sucks.

Most of all, before you settle on crap like this; THINK!