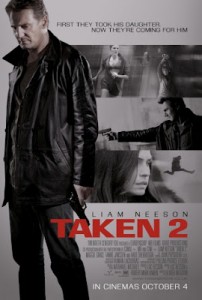 “Now I know how John McClane feels every Christmas.”

2008’s surprise hit Taken was an uber-violent action flick starring ‘serious actor’ Liam Neeson (who let’s not forget was also in Krull…) as a steely eyed remorseless killing machine willing to do anything to retrieve his young daughter from the clutches of an evil forced prostitution ring.

Taken was fresh, cool and frankly awesome, and completely unexpected.

Taken 2 on the other hand is so very ‘expected’, both in terms of actually existing (you can’t not follow up a film that returns over 200M on a 25M budget), and in terms of what appears onscreen, which is essentially a blend of the illogical and the clichéd in equal – and equally frustrating – proportions.

T2 kicks in shortly after the original film comes to a close, with the Albanian people smuggling ring burying all the victims Brian Mills (Liam Neeson) left in his wake as he made a beeline for his daughter. Yep, apparently they took the time to collect all the dead guys from the various locations around Paris to transport them over 2,000 km (thanks google!) to the homeland. Either that or the French police said something like;

Regardless of logic, the Albanians bury the dead. They are a hairy bunch too, apparently razors are a no-no in Albania, and the hairiest and therefore most influential of them all swears vengeance upon Mr Mills.

Meanwhile in Los Angeles, apparently time moves at a different speed. Where in Albania only days have elapsed it seems Kim has had time to return her life to normalcy, fail a couple driving tests and find a boyfriend that she has been dating for months. No hint as to how her music career is going…

Lenore on the other hand has seen her second marriage hit a wall, which means she is a little less frosty to Brian, who himself is far more relaxed and content with life.

Well it’s about to get busier for the Mills (and whatever hyphenated name Lenore went with). Brian is still performing bodyguard and security services for those wanting gents with ‘special sets of skills’… having just completed a short stint in Istanbul he is surprised to find Lenore and Kim arrive unannounced to share a few days of (broken) family bonding.

The Mills family shouldn’t holiday. Within hours Brian is on the phone to Kim with the roles reversed – he even butchers his own line from the first film – clumsily telling her that Ma and Pa are about to be *GASP* taken.

For the world’s most protective Dad Brian and his family sure get stolen a lot.

So what do the Albanians do next, after they travel across many nations to audaciously kidnap their sworn enemy and his wife in broad daylight and transport them back to their hideout? They tie him to a pole, place his ex-wife in a position best described as the Kama Sutra via Hostel, then leave them alone while they watch the soccer…

It’s like driving to the pet store to buy a puppy after months of discussion and research,  then getting home and leaving it in the car.

And by the way just who is minding the white girl smuggling operation while all this is going on? All over Europe vacationing young girls are enjoying holidays and excursions without fear of being abducted by sleazy Eurotrash!

Among Brian’s ‘set of skills’ is the ability to use a mobile phone – which given he is 60-something isn’t to be sneezed at (my Dad sends me blank SMS messages all the time by mistake). While lazily secured to the metal pole Dad calls his little girl and in about a minute somehow grants her Miss MacGyver status – must be in the DNA. Without even the time to button her shirt (thanks director!) Kim uses a shoelace and three grenades to track down Mum and Dad in a random grotty Turkish building.

Tag. Over to you Dad.

For his part Brian doesn’t even seem that pissed this time around, more annoyed that he has to work on his holiday. During the various life or death struggles and poorly edited fights between him and multiple Albanians he comes across as plain old bored – so is the director. Where the first Taken was lean and mean and better than it deserved to be, Taken 2 is unfortunately exactly what you expect given the material.

A 15 minute span in the second half of the film boasts:

– A random train toots rather than hits the brakes before cleaning up a car,

– A man gets shot and manages to reverse momentum to fall forwards off the balcony,

– A huge reinforced roadblock is penetrated by simply driving through the middle,

A muppet could predict what happens next. In fact aside from this one sentence summarising the plot ‘Albanians hate an American that killed their family members in France so they follow him to Turkey to kill him’, that same muppet could predict the events in Taken 2 from opening credit to last.

That’s not to say it’s all bad, Liam Neeson is blessed with the ability to remain watchable even  in crappy films when his heart isn’t really in it. But like most sequels Taken 2 is a pale imitation of an original that chooses to rehash events rather than further the story.

Final Rating – 6.5 / 10. If the Albanians were pissed after Taken imagine how they feel after Taken 2. What they’re all dead? Died horribly you say? Oh well, too bad.