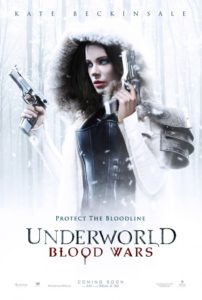 You know the awkward moments when someone takes a joke that wasn’t funny in the first place, way too far?

The Underworld franchise was never meant to be funny – and its wilful absence of humour is an issue in itself – but the second these po-faced S&M rocking cosplayers started crapping on about the centuries long vampire vs werewolves feud aaaagaaain, the joke was already tedious.

It’s long past that. Looooong.

Underworld 5 (seriously, 5. Name two others. I dare you) opens with Selene (poor Kate Beckinsale riding the dissipating wave that is her career) once again running solo. She has no allies, no friends, no family and no reason to still be here.

Atop this is the realisation that both lycan (the werewolf aka) and vampire hunt her, while simultaneously seeking her daughter Eve, who is said to hold the key to winning this never ending war. Twenty minutes in and I was praying intently that they would find her and put an end to all this.

This is politics and backstabbery with a plot that makes as much sense as a Kanye West concert rant. Consider that in a battle between lycan and vampire – both species renowned for their fang-work – almost every battle has them firing guns at each other. Magic guns (or something) yes; but guns. That’s like boxers deciding battles with games of Scrabble.

So many lengthy plot describing scenes. So much tedium.

How could something with a plot so stupid, made by people who stole ideas from the Blade trilogy and production ideas from Game of Thrones, be so serious?

Only a few years ago I pondered whether Underworld was more meritorious than the (also execrable) Resident Evil franchise. Somehow I saw Underworld coming out on top, but I see it now as a stalemate. I mean at least Resident Evil knew when to stop. Eventually. Apparently there’s another one of Selene’s stories on the way!

There must be a niche audience for this. Even with the reusing of costumes, sets and Blade 2 plots, made in low budget Eastern Europe, surely the filmmakers realise people must feel the need to buy tickets. How does putting Beckinsale on a poster firing guns work? I mean Beckinsale has zero box office draw beyond this film series, and there hasn’t been a good film in this franchise yet.

At least in some of the earlier films you could pretend to enjoy the action sequences. Well maybe you could in #4, the only film in the series that threatened to entertain, and the only reason I got fooled into watching this… this… sadness.

Perhaps the greatest trick the franchise ever pulled was convincing 1% of the population that it had a reason to exist?