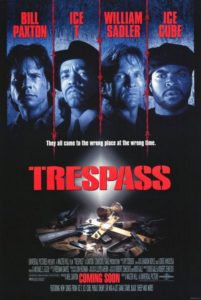 Trespass is more evidence that director Walter Hill often had times when he opted to make ‘something’ rather than waiting for the ‘right thing’.

A paint by numbers siege tale that finds two off duty firemen Vince (Bill Paxton) and Dom (William Sadler) in possession of a literal treasure map that takes them to a run down slum building in the ghetto, on the hunt for long lost gold, Trespass clearly delineates the ‘good vs bad’, but can’t do much beyond having them yell at each other through a wall.
The ‘bad’ in this case is a gang of ‘urban threats’ (black guys) who have the poor timing to waste some sucker punk in front of Vince and Dom.

*sigh* Now we must kill these white fools too.

And that’s about the extent of things. Dom and Vince want out,  King James (Ice T) and his crew (Ice Cube among them) can’t afford to let them out.

It’s the same premise as last year’s far superior Green Room, which made practically the same film, only with far more flair and impact.

This is not nearly as creative. In fact a sure sign of its banality is when the best bit is clearly the aggressive rap song that plays over the credits. When the thing that wakes you up takes place after the story is complete, that’s not good folks.

Final Rating – 6 / 10. With Walter Hill it seems you must sift through the good and the bad, this falls somewhere in between.