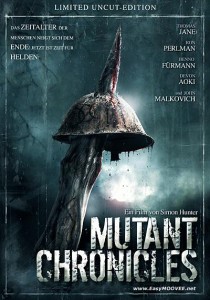 Everything that takes place in this film is foretold in an ancient book that the small band of ‘heroes’ take with them on their arduous journey for guidance and strength.

I’m not sure if the chronicles made mention of just how bad the film version of the story would suck. Something warned humanity though – this film came and went without a trace – and deservedly so.

A mere 700 hundred years from now the Earth will be split into four zones, all run by separate warring companies, who despite having all the knowledge available to us now and another 700 or so other years to refine and practise, still wage war in the same fashion as we did in World War 1.

Unfortunately as trench warfare tends to do, the latest bloody battle for share price supremacy inadvertently unplugs the cover from a huge hole beneath the Earth’s surface, allowing a bunch of mutants to escape and wreak havoc on the unsuspecting soldiers above, which given that the mutants are people with crab claws seems a little far fetched. Even more far fetched perhaps than a plug in the Earth’s surface holding them at bay…

After the mutants take out a few soldiers all of humanity throws up their un-clawed hands in despair. Even though the crabs can be taken out with gunfire and swords they are deemed indestructible. It’s apparently that easy to take us out. The rich and privileged take to spaceships for respite, with the remaining population left with little alternative but to take a knee and await their fate.

But Ron Perlman didn’t sign on to not have a supporting role in a shitty B movie. He plays Father Samuel, a holy man and protector of the chronicles. Samuel says that a small band of brave men and women might be able to descend into the plughole, find the ‘ancient machine’ creating the mutants, and blow it up with a ‘holy bomb’.

It will be hard (for you to watch). Some will suffer (no-one that you care about). Some will even perish (he’s referring to your brain cells this time). But most difficult of all, will be resisting the temptation to press ‘eject’.

Samuel forms a team of humanity’s best and bravest – none of whom stand out for positive reasons, and takes them into the bowels of the Earth into the CGI land Sucker Punch rejected, to indulge in some of the laziest and poorly thought out ‘action’ in recent years.

Thomas Jane seems sure that his role entails only gritting his teeth and furrowing his brow, both tactics that are right in Ron Perlman’s wheelhouse. John Malkovich even pops up in an early scene, though he wouldn’t want me telling you that.

But the real ‘star’ of the show is the CGI, for without it this film would have nothing worthy of mentioning whatsoever. Not that this is a good thing mind you, because the computer generated imagery in Mutant Chronicles is as bad as any I have witnessed since the turn of the millennium. Blood sprays gush from somewhere close to (but not really) the supposed victim, mutant limbs that look as firm as a wet noodle flail about aimlessly, and several other ‘computer assisted’ moments had me skickering in disbelief.

Actually it’s probably a good thing that no-one saw this, it might mean the cast get another chance to appear in a film that doesn’t suck.

Final Rating – 5 / 10. The harshest thing I can say about Mutant Chronicles is that you could fool me into believing Uwe Boll was behind it.