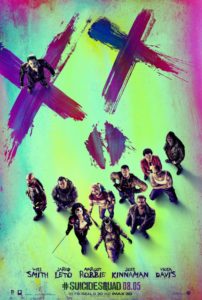 Like Watchmen – itself a disappointing conglomeration of inferior superheroes – Suicide Squad spends an interminable period of time introducing our discount rack dynamos, before ignoring most and focusing only on the two main ones…

We have Floyd aka Deadshot (Will Smith). He can shoot good. He is bad.

We have Harley Quinn (Margot Robbie). She is the Joker’s girlfriend. She is bad.

We have Digger aka *ugh* Captain Dingo (Jai Courtney). He is an awful Australian stereotype. He is bad. For reasons beyond behaviour.

This is like being dragged to a dinner party you don’t want to go to and being introduced to every single moron there. But don’t worry, we’re already into the filler.

We have Chato aka El Diablo. He can spontaneously erupt into flames. He is so bad he doesn’t trust even himself.

We have Waylon aka Killer Croc. He is apparently part reptile, but he proves how little this effects him by acting ‘urban black’, so that’s nice. Oh and he is bad too.

Every character introduction is accompanied by a noisy song. As a matter of fact almost every action regardless of how banal or inconsequential gets its own theme music, played by the Lord of Over-Compensating.

These bad dudes and dudettes are summoned by Amanda Waller (Viola Davis) who doesn’t have an aka, so I’ll give her one; she can be The Narrator. No, make that Ms Exposition. Or could it be Madam Lazy Plot Device? How about The Introducer?

So Ms Exposition tells the assorted bad types that they are to bring someone even badder than them to justice. She is Dr June Moore. She has an aka as well, namely The Enchantress, and she has gone rogue.

Of course it is rarely that easy. Only here it totally is. The Enchantress sends waves of mindless minions toward our wisecracking weirdos.

In a guilt free manner these… bad guys… creatures… things are dispatched in clouds of ash – no blood in this limp PG fluff – as one by one these former ‘bad guys’ learn to trust one another, to work together, to value each other, to value themselves. To love again.

This is such lazy filmmaking. One third intro, one third walking to the finale, one third killing our hopes and dreams in a tornado of lazy CGI and clumsy attempts to pull at the heartstrings. Will, Margot and Viola get all the lines, and despite the publicity Jared Leto’s Joker proves exceedingly forgettable.

I recently lamented that Deadpool missed the point and dumbed itself down in the pursuit of an edge. Well that film looks pretty cutting edge when compared to this colossal misfire.

The irony is that Suicide Squad only exists because Hollywood seems out of good superhero properties, so it settled on a self professed ‘bad’ one, and then didn’t really try to make it anything more than a lurid cash-in.

Final Rating – 5.5 / 10. The sad thing is that this isn’t totally horrendous, and that with a bit more thought it could have actually been good. But yet again they settled for star-power, pre-release bluster… and a box-office bonanza that will of course guarantee we will all be duped again very soon.