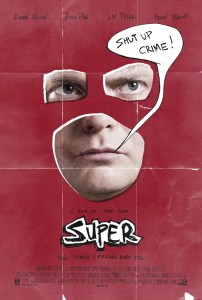 When recovering addict and alcoholic Sarah (Liv Tyler) leaves gormless, innocent and well meaning diner cook Frank (Rainn Wilson) for Jock (Kevin Bacon), the handsome chiselled face of the inevitable, it is hardly a surprise to anyone involved. Jock himself finds no peril in calling on Sarah in her own home, and when she is nowhere to be seen happy enough to chow down on Frank’s cooking – even complimenting his work.

After the cold hard realisation hits home Frank tries to fill the void with a pet, then in renewing his commitment to his faith. When both of those things don’t provide the answers he dons an awkwardly skintight red suit and starts hitting people with a wrench…

As the Crimson Bolt Frank finds release in dealing with crime, unlike Spiderman and Kick-Ass (a film Super shares many parallels and similarities with) he discovers that crime is not always instantly accommodating to superheroes and that he must go to the source. In the long run Frank finds that his views on what comprises a wrenchable offence become less strict depending on his mood – butting in at the cinema queue provides one couple a painfully unjust lesson – and with an amazingly inept police force unable to track down these blatantly and increasingly violent acts of vigilante ‘justice’ Frank’s acts gain media notoriety.

This attention finds a young fan in Libby (Ellen Page), an impressionable employee at the comic book store where Frank performs his super-hero ‘research’, eventually Libby becomes a devoted if obviously ill-suited Hit-Girl to Frank’s Kick-Ass, complete with mask and green and yellow suit.

The mismatched duo – now known as the Crimson Bolt and his sidekick Bolty, ultimately turn their attention towards Jock and his crew of menacing and heavily armed employees, as Frank never stops pining for his long lost Sarah.

Super was made by James Gunn, whose career highlights thus far were penning the Dawn of the Dead remake and directing the incredibly underappreciated Slither. With Super it seems that at every key decision point he thinks “What would Hollywood do now?”, and does exactly the opposite. This leads to so many things that may be deemed inappropriate by the mainstream, and indeed with so many wrongs to choose from it is impossible for me to pretend that I defend them all, but with each jaw-dropping turn and deliberately anti-PC comment I urge you to remind yourself that Super is at heart a (very) black comedy of the darkest and most calculating kind…

But is it any good? At times; sort of. But in reality not good enough. While the constant ignorance of the boundaries of good taste and deliberate flouting of mainstream conventions might prove admirable to the more rebellious and fans of alternative cinema, it all too frequently isn’t backed up by actual jokes and decent scenes.

I am sure that Super will become a cult classic and this year’s nominee for the ‘I’m not saying you’ll like it, but you gotta at least see it’ backhanded recommendation, I can’t see the actual entertainment value in Super or creativity beyond being it’s constructed anti-Hollywood-ness.

Once you’ve seen the first few unnecessary wrench beatdowns and ‘oh gee I thought they would go the other way’ scenes James Gunn shows his true intent, and the surprises become less impactful (for the most part). Then comes the realisation that this is how it’s going to be from here on in, and after this point Super becomes not so…

Final Rating – 6 / 10. I can’t really recommend the entertainment value. But count me among the guys that urge you to watch it and make up your own opinion, because one thing is for certain: from the cool animated musical number intro to the violent culmination of the Crimson Bolt’s brief crime fighting career, Super is unlike any other film you will see this year.

While I try to throw a joke or two into proceedings when I can all of the opinions presented in my reviews are genuine. I don't expect that all will agree with my thoughts at all times nor would it be any fun if you did, so don't be shy in telling me where you think I went wrong... and hopefully if you think I got it right for once. Don't be shy, half the fun is in the conversation after the movie.
View all posts by OGR →
This entry was posted in Film, Movie Reviews, OGR Recommends, The Grey Area. Bookmark the permalink.