I Love You, Man (Review) 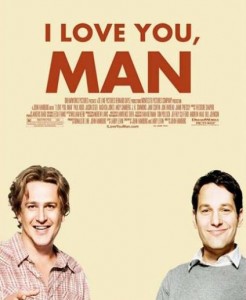 The strength of I Love You, Man (ILYM) isn’t so much the plot, which is the same as most really good comedies. The strength of ILYM is the jokes silly! It also helps that the jokes and lines are delivered by a cast of strong character actors that (forget the ad-libbing bullshit) are likeable and actually funny.

This is the main failing with most so-called comedies of the last 10 years, for some reason the tendency became to fill the cast with smarmy guys who you wouldn’t want to know personally, Jason Biggs, Dane Cook, etc…

Paul Rudd and Jason Segal are genuinely likeable and don’t resort to cheap shots or too many fart gags, in saying that there are unlikable characters, but that is because there are unlikeable people in society, and in the movie you aren’t supposed to like them like you are in say American Pie. In the interest of full disclosure I must point out that there is a gross out body fluid joke, but it is so fucking funny that you’ll forgive the intrusion.

So now that I’ve dismissed the need for a plot, here it is: Paul Rudd is a real estate agent who is getting married to a super girl, only he has absolutely no male friends to count on as his groomsmen or best man.

(I thought Role Models had a flimsy premise, convicted criminals are sentenced to community service by….. being told to look after impressionable teenage and pre-teenage boys? Yeah that’s who we want teaching the youth!)

Paul Rudd is ideal for this role, most guys would like to have him as a mate and most chicks would love to just have him. He’s a nice guy, witty, personable and fun to have around. Here’s the rub, Rudd is about 40 and works in an office with many people, given what I have just said how can he have no friends?

Paul is Peter Klaven and marrying Zooey (I’m not being sexist but I can’t remember a single joke or worthwhile thing that she did in this movie, she is simply a reason for Peter to get engaged and get up to hijinks). After becoming engaged Peter and Zooey realize that Peter has no male friend close enough to ask to be his Best Man. Rather than query what hidden flaw causes this problem Peter decides to go out and rectify the issue.

Cue the several obligatory clumsy and awkward man dates, Deuce Bigalow style, only without the pathetic shoehorning of obscure dysfunctions, such as tourettes or sleep diseases. They are all pretty funny and worthwhile, as are the many “smaller” scenes involving Peter’s vague acquaintances and Zooey’s friends (and husbands).

Most believable of these involve Jaime Pressly and John Favreau as a married couple who are only 5% removed from reality, they both hate each other most of the time but still stick together regardless. Favreau is an absolutely glorious prick.

Peter has precious little success with his initial planned dates, but he runs into Jason Segal as Sydney at a home open (for Lou Ferrigno, the model for the Hulk show in the 80’s, natch). Sydney isn’t house hunting, just scarfing down the free food on offer, and as the classics might say they share a “moment” and swap contact dets.

Of course Peter calls Sydney and they gradually strike up an unlikely friendship that seems extremely likely as they are not that dissimilar. Sydney is portrayed as a slobbish man’s man with numerous offensive quirks and issues, but realistically he is not too far removed from most guys. Sure he is a little more honest and open than most guys about his lifestyle and habits, but a lot of guys that I know just aren’t that different from Sydney. (Aside from the walking the dog in public and deliberately not cleaning up after it, that’s just wrong no matter how you look at it.)

Particularly cringe inducing is Peter’s early attempts to cosy up to Sydney with snappy talk and ridiculous non-sequiters that he almost always gets pathetically wrong. Anyone who has tried to impress someone they have just met with clever witticisms (which in reality is all of us), and gets it wrong knows how embarrassing this can be.

If you’ve been paying attention you realize already that this is a very funny movie that cleverly switches the rom-com gender to be primarily about two guys and how they symbolically “fall hopelessly in like”. Anyone who has seen any rom-com of the last 50 years knows in advance that nothing will go that smoothly, and Zooey decides after a while that Peter is spending altogether too much time with Sydney. (A cynic might say that the missus can’t stand to see her man happy, lucky I’m not a cynic.)

There are numerous bit parts that almost always add laughs to proceedings, or at least aren’t either pointless or annoying. It seems that Judd Apatow has a lot to answer for, as between this, Superbad, Role Models, Knocked Up etc we have been introduced to so many character actors that crop up in almost all of these movies. (I Know Apatow didn’t make most of these movies but his shadow looms large.)

For a test case I imdb’d the Asian guy that appears frequently (I found out his name is Ken Jeong) to see how much crossover he had in these flicks, here we go:

Now I enjoy being right, so let’s do another, the baby-faced annoying guy who never seems to be in the film for more than 7 minutes (Joe Lo Truglio):

I rest my case. Those are some awfully similar resumes over a 5 year period. Not that I’m complaining, I’d rather see Paul Rudd or Jason Segal in every movie than watch Dane Cook, Rob Schneider or Jason Biggs annoy their way through absolutely ANYTHING.

The moral of my long winded rambling here is that if you like any of the movies in the above lists, you’ll find something to like here. (If anything many somethings.) I laughed frequently and genuinely through this movie, no forced jokes and only a little gross out stuff.

I remember 20 some years ago a year didn’t go by without Tom Hanks, Steve Martin, Bill Murray or Eddie Murphy releasing multiple decent comedies between them, with Will Ferrell, Adam Sandler and Rob Fucking Schneider taking the reins in the late 90’s until recently the standard dropped right off, which necessitated the gross out crap of American Pie, Road Trip etc.

If Hollywood wants to bust out one or two of these a year that would be a welcome return to form.

Final Rating – 8 / 10. A flimsy plot and an even more unlikely situation doesn’t change the fact that this is a really funny and likeable movie. The perfect date movie that finally will please both hubby and wife.