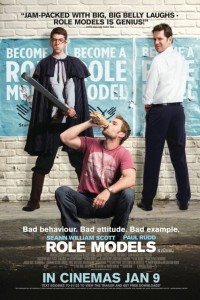 Danny (Paul Rudd) has a bad day on the job and drags his loyal but dim-witted buddy Wheeler (Sean William Scott) down with him. Danny is a ‘Red Bull’ style energy drink spokesman, Wheeler is the guy in the bull suit that jumps around beside him. In the same 24 hours Danny loses his girlfriend, license and job.

In reality he starts by losing the girlfriend Beth (Elizabeth Banks), and his subsequent tantrum and stupidity sees him lose both license and job and sees him teetering on the verge of imprisonment. Somehow guilt by association sees Wheeler in the same predicament.

To avoid jail Beth – who happens to be a lawyer = lucky – wrangles community service instead. Service in the form of helping disadvantaged and troubled kids for a company named ‘Sturdy Wings’.

This shakiest of premises: allowing unreliable young men to mentor impressionable young boys, sets the scene for the slap dash stuff that follows.Miraculously enough though the threadbare premise is held together by enough jokes and amusing moments to make the thing worthwhile, largely due to the continued comedic stylings of one Paul Rudd, and the strength of the various supporting bit parts on dispay throughout.

When allotted their respective ‘littles’ (Danny and Wheeler are ‘bigs’) by Sturdy Wings boss and recovering alcoholic Sweeney (Jane Lynch) we immediately see where this is going.

Danny considers himself ‘normal’, but in reality he is so concerned with not being deemed ‘uncool’ that his disdain for cliche and obvious statements leaves everyone else bored by his constant judgment. He scores 16ish Augie (Christopher Mintz-Plasse), a medieval-style role player who is intensely insecure when not in character, and intensely-intense when he is.

Wheeler on the other hand wants no part of responsibility of any kind. He is more than happy being the jumping around sidekick in the costume and has no thought for his own future. For now he is all about the… well let’s just say boobies (and everything below). Of course he is allocated troubled young 8ish Ronnie, a profane little shit-stirrer who wants nothing more than to not have to deal with adults.

Each kid has parental issues – but ones that don’t kill the potential laughs – no abuse here, and the guys must get through to the children in their own way, and sucks; maybe learn a little about themselves on the way…

What develops is a rom-com with all the associated hijinks, temporary fall-outs and hitches, only between an adult male and a kid/youth, but that’s not where the laughs are born.

Role Models works best in the smaller roles, the now renowned Ken Jeong keeps his pants on this time and plays the King of the role playing game L.A.I.R.E., surrounded by his toadying minions and remaining in character even away from the game in his kingdom at the local cafe. Jane Lynch is a little OTT with the attempted mind games as the Sturdy Wings boss, but she also gets a few of the best lines in the flick, and there are numerous other bit roles – each with a couple jokes – filled by character actors that’ll have you remembering them from other bit roles in other flicks.

The jokes are thrown about quick and fast, and while some don’t work enough do to make Role Models a lot like I Love You, Man and Knocked Up, lightweight and amusing enough to justify your time, with occasional genuine humour (and unexpected nudity!).

Final Rating – 7 / 10. I can see the future. When I watched this 4 days ago I knew myself well enough that I wrote “It really is a 7” next to the rating. You might not recall Role Models as such a cracking laugh weeks after the viewing, but while you are watching it is a good time.