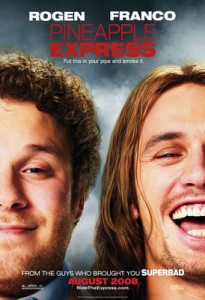 Franco gets it, Rogen isn’t sure.

This was released when the Apatow-Train had already gathered seemingly unstoppable momentum on the back of The 40 Year old Virgin, Knocked Up, Superbad and even Anchorman (WHICH SUCKED!).

Pineapple Express was described as among other things a Seth Rogen pet project where he set out to make a stoner action comedy classic. I don’t smoke so you’d have to ask a stoner what they thought, but I can say that even with a few chuckles and some mildly amusing action scenes this is no classic as either an action or a comedy, despite some promising elements.

When Process Server (a guy who hands lawsuits to unsuspecting and often unwilling litigants) Dale (Seth Rogen) unwittingly witnesses a murder by a known drug dealer and a corrupt lady cop, leaving his unique half smoked joint on the scene – he and the dealer who sold him the pot are immediately targeted for death.

The dealer who sold him the weed is Saul (James Franco) – a laid back, long haired, pyjamas-all-day caricature who just wants someone to hang out with.

Dale is a similarly unkempt and self maintenance neglecting young man who happens to like nothing more than getting high and killing time with his wayyy out of his league high school attending girlfriend.

Now one of the murderers is a major drug dealer who happened to supply Saul with the weed that he onsold to Dale. Let’s rewind: The ONLY drug dealer with the unique Pineapple Express sold it to Saul, whose ONLY customer was Dale. Dale then randomly was given the task of serving the SAME drug dealer and left the half smoked joint ON THE SCENE while fleeing.

After this most tenuous of connections Dale and Saul set off on the run. Almost every scene starts with them getting high or talking about either getting high or getting away, though there are a few laughs:

“What do you know about Ted”

“Um, Ted is crazy about murdering”

After getting particularly high and paranoid they decide to trace things back to the drug middle man a guy named Red (Danny McBride), who is dumb and well meaning, but will do anything to save his own skin.

From here it becomes obvious to the doped up duo that they are indeed in some very deep shit. There are some ridiculous developments that get a rival drug gang involved, and a couple of thugs that remain one step behind at all times.

The closing hour obviously indulges Seth Rogen’s macho action dreams, there are car chases, murders, much gunfire and violence and a finale that is a straight up 80s style shootout featuring all the main parties blazing away randomly whilst explosions and fistfights go on around them.

Seth Rogen obviously enjoys fulfilling his pre-teen action hero fantasies, James Franco is strangely likable as the stoner Saul and Danny McBride exploits what limited one note comedic ability that he has (that will inevitably run out off puff soon unless he plays someone beside himself repeatedly) as the out of his depth Red. Rosie Perez and Ed Begley Jr are both amusing playing against type as a corrupt cop and a foul mouthed protective father respectively in what both amount to little more than cameos.

A couple of the scenes are notable in that they harken back to the day when entire films were really only frames on which to hang a few action scenes, with the plot being a secondary consideration, and I guess there were a few jokes that worked. But as much as I sometimes miss the old 80s buddy cop action comedy there us perhaps a fair reason that we don’t see a great many of them any more, especially in cinemas – they are generally lightweight and disposable stuff…

In reality so is Pineapple Express, especially when you realise that even though it strives to emulate many of the classic 80 s efforts it is actually a pretty pale imitation of most of them.

Final Rating – 6.5 / 10. A throwback vanity project for Seth Rogen that has a couple of moments but never really hits any great heights.