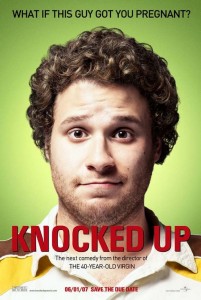 Well as a guy I would be especially surprised…

At first glance Knocked Up appears to be the ideal companion piece to the exceptional The 40 Year Old Virgin.

Both star (at the time) largely unknowns – and Paul Rudd – and have a large cast of quality character actors that are given room to riff and have fun within the framework of the script.

But where 40 YOV maintained the mostly harmless but especially adult humour until the very end Knocked Up traces the typical relationship all too closely. In the early stages the guy still hangs out with his buddies and indulges in things he shouldn’t, talks a lot of rubbish and is generally loads of fun. There is lots of sex. Then things get serious as boyfriend and girlfriend unite in a (screechy voice) relationship and the fun dries up quick smart in a hurry. No longer does the guy hang out with the buddies joking and having fun and the sex becomes past tense. Things in general become all together too touchy feely and bland…

While I was outlining the character arcs of Ben (Seth Rogen) and Alison (Katherine Heigl) above I could just as easily have left that as a description of the film.

When good-natured no-hoper Ben lucks out at a nightclub by hooking up with Alison who has over-indulged in celebration of a big promotion there is no end of high fives from his similarly inclined scaly flatmates, while Alison is left to regret the impulsive act the next day with her sister Debbie (Lesley Mann) and Debbie’s husband Pete (Paul Rudd).

We all make mistakes.

Alas in this case the ‘mistake’ is an especially pregnacious one, in the weeks that follow Alison eventually comes to the realisation that perhaps she is not simply a little ill, but perhaps expecting.

The first hour of Knocked Up contains 99% of the best jokes and humerous scenes as Ben and Alison come to terms with their predicament and progressively inform family and friends, most of whom are all too happy to give their thoughts on what the couple should do – even if they aren’t asked.

The first time you watch the film it might slip by unnoticed, the second and third it is as obvious as dog’s balls.

And for those unsure if I am accurate consider that the film even closes with a montage of the cast and crew’s baby photos with a soft-cock sentimental tear jerker of a song over the top.

That doesn’t mean that Knocked Up is lousy, just not near as good as it might have been. Not that I am knocking rom-coms (I am), but there are a million and one of those every year – all starring Jennifer Aniston and/or Goldie Hawn’s kid – and they all suck. Witty, funny and clever adult comedies don’t come along near that often, so when you see one that is so ‘nearly’ and witness it disintegrate before your very eyes it is incredibly frustrating.

Back to the film, Seth Rogen and Katherine Heigl do their best Rogen & Heigl impersonations, Rogen is a likable doofus and Heigl a harmless personality free nice person (her worst scenes are where she is required to show an actual emotion). This leaves the film’s second couple as by far the more interesting pairing, with Debbie and Pete’s combustible and all too familiar relationship trials and tribulations constantly amusing. In fact a film about them would have been better, simply for the fact that they are already married with kids and therefore have assumedly gone through all the delightful misunderstandings that every cinematic couple must go through before they realise they are perfect for each other. *Blecchhh*

Of the peripheral characters so many familiar faces from the Apatow stable appear that I won’t mention them, but I will say that Ben’s flatmates are now seemingly half of the regular young actors in Hollywood, with Jonah Hill, Jay Baruchel and Jason Segel among them. I might also add that Segel steals every scene that he appears in.

I still like Knocked Up, I just wish for once that the male wasn’t required to ‘grow up and be a man’ in order for the film to end happily…

Final Rating – 7.5 / 10. Knocked Up is still funny and fresh for the most part, it is just unfortunate that it has to end with such a saccharine aftertaste thanks to the fairly lazy blah ending.