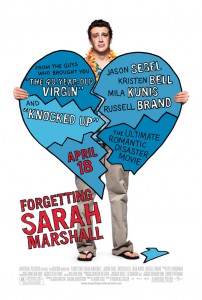 After The 40 Year-Old Virgin R Rated comedies got their 15 seconds, this lead to some good stuff; Superbad, The Hangover. Some average; Knocked Up, I Love You, Man, some less than stellar but OK; Role Models, Pineapple Express and Walk Hard. And shit like Step Brothers and anything with Schneider.

One thing that bothers me is the recent insistence that every character have some seemingly nerdish or embarrassing trait before we can embrace them?

Knocked Up – He was in a fantasy baseball league.

I Love You Man – Fencing. (Acting like a big girl?)

Forgetting Sarah Marshall fits in alongside Superbad, though it is not quite as funny. The nerdish thing(s) that Peter does include wearing tracky-dacks for days at a time and writing musicals for puppets to perform.

**** For the record – I do many of the nerdiest things. I am in multiple fantasy sports leagues. I have action figures even though I am in my 30s. I collect footy cards. I play computer games, though not online, and I wear trackies almost constantly when I am at home. No drawing dicks all day though. ****

Peter (Jason Segel) is dating Sarah (Kristen Bell), has been for a long time. Peter is supposedly nerdy (refer above) while Sarah is hot and famous.

Peter shows his doodle and pleads for her to come back. Sarah then says she is already seeing someone else.

After the obligatory “Peter tries out a bunch of skanks” montage, which at least allowed the filmmakers to add Bill Hader as his step-brother, Peter decides to take some time off and heads to Hawaii to recharge the batteries.

The holiday is unplanned, he literally gets on a plane and arrives at the airport without any other structure. So the first hotel Peter gets to is fully booked, and who do you think shows up?????

Peter is understandably unsettled by this unexpected (but totally expected) turn of events, and imagine his surprise when the desk clerk Rachel (Mila Kunis) helps out by allowing him to stay rent free in one of the more luxurious suites, happens all the time right? I mean she has that power. Who else wouldn’t risk their job for someone they never met before?

I bet you would!

As Peter continues feeling sorry for himself and boozing his way through the week he keeps bumping into the new happy couple which depresses him more, and other guests and staff try to cheer him up which leads to encounters with Jonah Hill and Paul Rudd, and more and more meetings with Rachel.

Peter learns that Aldous Snow is actually quite cool, as well as being a world famous rock star he is a recovering addict and a pretty nice guy, which shits him. He also finds out that Aldous and Sarah have a past that goes a little further back than he first thought, that shits him more.

As Peter gets along better with Rachel a mistimed polite gesture becomes an awkward double date, with both chicks trying to one up each other. (For the record: Mila by a mile, even if she has absolutely no arse.)

Forgetting Sarah Marshall definitely has its share of potty talk and there are some dirty bits for the grown ups, but in the main it is kept pretty light and likable. Thankfully there are no fluid or put down jokes that seem to be the thing these days.

As well as being pleasing and almost constantly funny Forgetting Sarah Marshall managed a few other notable things:

Aside from the much publicised doodle showing and some low key sex scenes Forgetting Sarah Marshall is basically a feel good comedy. There is little to detest or recoil at, and even if you don’t agree with Aldous Snow’s philosophy on women it’s still pretty hard to dislike the guy.

I still haven’t seen Get Him to the Greek, I plan to but can’t shake the feeling they’ll somehow fuck it all up, (Jonah Hill, your 15 seconds are soon over!).

Final Rating – 8 / 10. Throwaway fun with jokes aplenty and a beautiful backdrop, both Hawaii and the two leading ladies.