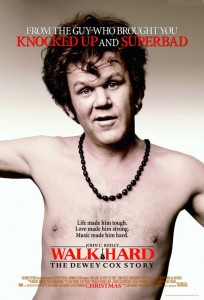 After a poorly thought out machete playfight leaves his brother bisected out of all existence (according to his father the wrong boy is bisected), Dewey Cox turns to music. Within hours he has mastered the blues…

But he doesn’t end it there, and over five more decades he enjoys a career which would be the envy of all, and with striking nudge-nudge similarities to many renowned artists of modern times.

After striking it big with his grandiose Johnny Cash style song entitled ‘Walk Hard’, Dewey transitions seamlessly and effortlessly across genres, thankfully stopping before he gave rap a try in his 70s – though I guarantee they considered it. You name it, Dewey made it his, in sequences that bear amazing similarities with other luminaries in the respective genres that will have the slow on the uptake asking themselves ‘Wait, I thought ‘X’ did that?’

Meanwhile Dewey’s home life is equally predictable, with a wife of fluctuating support (and an ever rising number of kids) openly resenting the temptations of the road, drugs, hussies, hot back up singers, double marriages. Dewey dabbles in them all.

He also battles with rival bandmates, crippling writer’s block and the perils of excess, which lead to multiple rehab stints and occasional prison terms. And on top of all of that he has no sense of smell!

It’s all lighthearted and often ludicrous, as you might expect from a film with practically every second Saturday Night Live cast member from the last decade and almost every actor bearing the coveted ‘Apatow approved’ stamp in the cast.

I am amazed and pleased that John C Reilly got his shot at heading up a big dumb comedy – though Will Ferrell probably hates him for it – Reilly allows Cox to be as wilfully ignorant and blindly arrogant as the role required without resorting to simply screaming every second line in the ‘name of comedy’.

I’m guessing that people under 30 won’t get too much from this film given how dated and specific the many references are. Sure they’ll see the nudity, chuckle at the silly song titles and accompanying lyrics and laugh occasionally at the repeated jokes, but a lot will pass them by.

I am much nearer 40 and know my basic music history and still am certain a lot of jokes and references went right by me. So when your target demographic is 40 somethings who love music and love Judd Apatow movies, you’re really thinning out your potential audience market.

If you do actually fit that demo then I think Walk Hard: The Dewey Cox Story might provide you with an entertaining couple of house. If you are part of the 99.6% of the non-interested then you might well think differently.

Final Rating – 7 / 10. Walk Hard is more ambitious than any puerile comedy spoof deserves to be, but for the most part it is good natured and funny enough to pay its way.